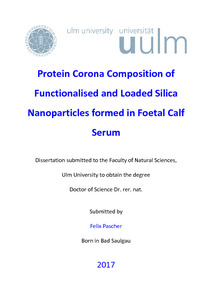 Nanoparticles on silicon basis are biocompatible, biodegradable and also easily modifiable, which makes them a prime candidate for clinical research and medical applications. Especially a detailed understanding of the underlying interactions at the nano-bio interface is of interest. Although many studies exist, the results are often ambiguous and contradicting. Accurate predictions of their behaviour in an organism remain therefore very challenging. This is particularly noticeable in the differences between in vivo and in vitro experimentations. Therefore, the aim of this thesis was to study the nano-bio interface, particularly the composition of the so-called protein corona of differently functionalised silica nanoparticles The analysis of the protein corona was performed by 1D and 2D PAGE analysis. These techniques have many positive qualities, one of which is the direct visual feedback. This makes comparison between different samples easier, especially when samples are run on the same gel. Yet, quantification of the results is much harder compared to other widely used systems such as LC-MS. In addition, the throughput rate is lower. One of the most approachable interactions at the nano-bio interface is the accumulation of proteins on nanoparticles. The protein corona formed in this way is known to influence the behaviour of the nanoparticle in the biological medium. Targeting ligands can be blocked, the release of internalised drugs can be hindered and the nanoparticle-cell interaction can be influenced. The proteins recruited to the particle surface depend on the immersion medium, the physicochemical characteristics of the particle as well as multiple highly variable parameters, such as temperature and time. In this thesis, multiple factors influencing the protein corona formation, as well as factors influencing the protein recovery were tested. The protein corona was stripped of the particles with several desorption buffers to enable the comparison between different referential sources. The choice of desorption buffer does influence the quantitative analysis of the recovered proteins, but not the qualitative analysis. The main part in this thesis pinpoints the impact of different hydrophobic, and fluorocarbonated nanoparticle surfaces on the protein adsorption. It is shown in this thesis, that the surface does not necessarily need to be functionalised covalently. The payload does often suffice to project its properties on the whole particle. Next to a covalently functionalised fluorocarbonated silica surface, PFCE and hexane loadings of silica particles, as well as carbon replicas were used. This analysis revealed a strong correlation between the changes in the protein corona due to PFCE loading and the biological fate of the particles. A quick analysis of glucosamine functionalisation as well as differently charged moieties is also presented. In general, a unique quantitative protein corona composition could be detected, with surprisingly little differences in the proteins present. In summary, it is demonstrated, that the protein corona formed in blood serum around silica nanoparticles is unique to the particle system used. Yet, the source of the variety in the protein composition is hard to pinpoint due to multiple possible influences, such as surface charge, surface topography and hydrophobicity. The differences will likely have an impact on the biological fate of the respective nanoparticles.