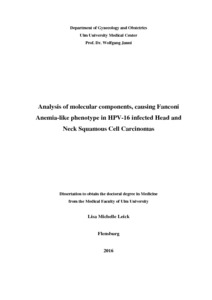 DNA repair especially of DNA double strand breaks is necessary not only for cell survival but also to prevent malignant progression arising from genome instability attributed to insufficient repair. Cells are able to accomplish DNA double strand break repair and repair of other DNA lesions through various pathways with pathway choice depending on lesion type and cell cycle phase at the time point of damage. Non-homologous end joining (NHEJ), available at all cell cycle stages, single-strand annealing (SSA) and microhomology-mediated end joining (MMEJ) represent the error-prone pathways. Homologous recombination (HR) is the most error-free type of repair, and inability for cells to employ this type of repair results in an increased risk of accumulated damage, genome instability and subsequent increased risk of cancer. The Fanconi Anemia (FA) pathway in particular executes repair specific to DNA damage resulting from interstrand crosslinks. Insufficiencies in this repair pathway, like FANCD2 deficiency, increase the risk of malignancy especially if DNA is exposed to agents causing interstrand crosslinks, such as the widely used chemotherapy drug mitomycin C. Head and neck squamous cell carcinomas are a type of cancer for which detection at an early stage is not common and treatment at a late diagnosis time point is complex often with grave side effects. An etiological shift of risk factors from alcohol and tobacco use to human papillomavirus (HPV) infection has taken place in the last decades. Observation of better treatment outcomes in this new group is promising but insufficient research has been conducted to change the clinical course of therapy of these etiologically different tumors. New targeted therapies are necessary to improve cancer survivorship and increase quality of life by shifting the focus to therapies devoid of the significant side effects of current therapies. Development of such therapies requires an understanding of the underlying mechanisms of DNA repair. Given that links between the FA pathway and HPV infection were suggested, it was the aim of this investigation to analyze various molecular components of HPV-16 infected head and neck squamous cell carcinoma cell lines targeting DNA double strand break repair. To accomplish this, a set of University of Michigan squamous cell carcinoma cell lines (UMSCC), FA pathway proficient and deficient by silencing of FANCD2, were compared in several ways to another set of these cell lines with HPV positive status.