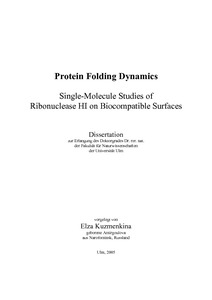 Heterogeneity of individual trajectories of a protein adopting its native conformation from the myriad of denatured states can be studied by single-molecule spectroscopy. However, to study timescales longer than a few milliseconds, the protein has to be fixed in space, for example by immobilization on a surface. The delicate structure of proteins requires surface coatings which neither interfere with the energetics of the folding nor introduce additional, surface-induced heterogeneities. In this work, we characterized and compared several surfaces devised for single molecule fluorescence experiments for their biocompatibility. The best surface was the surface prepared from the cross-linked star-shaped poly (ethylene glycol) polymers. We employed this surface to investigate the complex folding landscape of Ribonuclease HI (RNase H). Our single-molecule data revealed that the average radius of gyration of unfolded RNase H increases with increasing GdmCl concentration. We modeled the data as a shift of the equilibrium within a continuum of unfolded conformations and obtained various thermodynamic and structural parameters. The fluorescence time traces recorded from individual molecules showed that unfolded RNase H molecules fluctuate between many conformations on the second timescale. The transitions were spread over all possible initial and final FRET efficiency values, indicating a high diversity in the folding pathways. The existence of long-lived unfolded structures resulted in a significant width of the FRET efficiency distribution of the unfolded state. From the cross-correlation functions of the donor and acceptor emission, we found that the reconfiguration time of unfolded RNase H chains is ~ 20 µs. Applying Kramer’s theory, we evaluated the average height of the barriers between the unfolded substates and the barrier from the unfolded to the folded ensemble. Finally, we presented a two-dimensional scheme of the folding free energy landscape for RNase H.