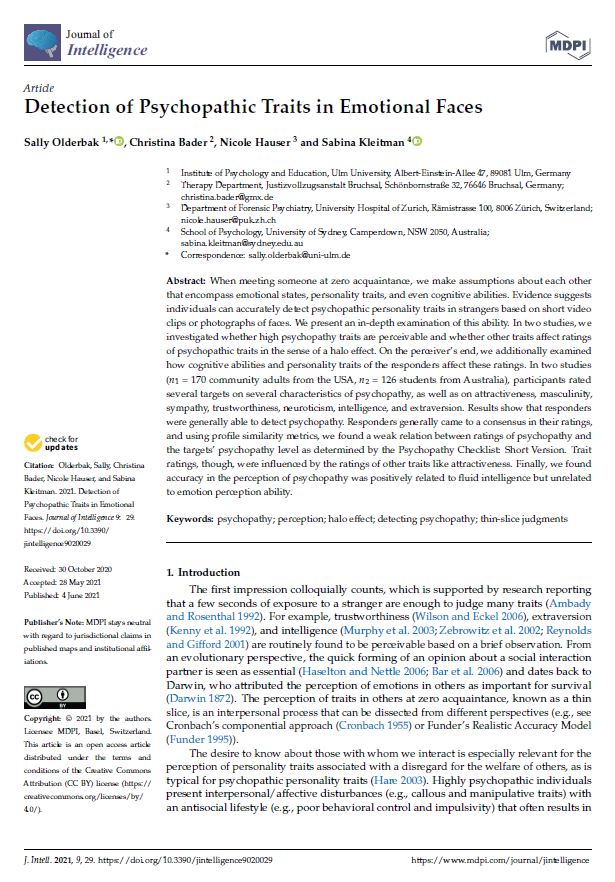 When meeting someone at zero acquaintance, we make assumptions about each other that encompass emotional states, personality traits, and even cognitive abilities. Evidence suggests individuals can accurately detect psychopathic personality traits in strangers based on short video clips or photographs of faces. We present an in-depth examination of this ability. In two studies, we investigated whether high psychopathy traits are perceivable and whether other traits affect ratings of psychopathic traits in the sense of a halo effect. On the perceiver’s end, we additionally examined how cognitive abilities and personality traits of the responders affect these ratings. In two studies (n1 = 170 community adults from the USA, n2 = 126 students from Australia), participants rated several targets on several characteristics of psychopathy, as well as on attractiveness, masculinity, sympathy, trustworthiness, neuroticism, intelligence, and extraversion. Results show that responders were generally able to detect psychopathy. Responders generally came to a consensus in their ratings, and using profile similarity metrics, we found a weak relation between ratings of psychopathy and the targets’ psychopathy level as determined by the Psychopathy Checklist: Short Version. Trait ratings, though, were influenced by the ratings of other traits like attractiveness. Finally, we found accuracy in the perception of psychopathy was positively related to fluid intelligence but unrelated to emotion perception ability.