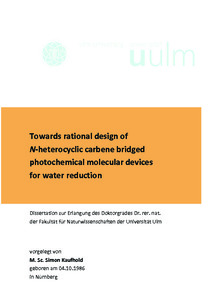 In order to achieve fair and easy access to energy for all and at the same time tackle climate change, the switch from fossil fuels to renewables is inevitable. Among renewable energy sources the energy delivered by the sun is by far the most abundant and most equally distributed around the globe. In order to make solar energy useable in a convenient way, its storage is a key point. A great potential to store (and later on release) energy lies in the formation of chemical bonds. In nature this process is performed by plants, algae and certain microorganisms in natural photosynthesis. In this process very abundant feedstocks – namely light, water and carbon dioxide – are used to generate high-energy chemicals like ATP, NADPH and with their aid hydrocarbons like sugars. Artificial photosynthesis tries to mimic this approach by generating devices or molecules that are able to carry out similar reactions. The most straightforward way to do this is the splitting of water into molecular hydrogen and oxygen by solar energy. Among the different methods, the use of supramolecular photocatalysts – often also called photochemical molecular devices (PMDs) – should ultimately be the most efficient one. Here the captured light energy is directly used to fulfil the water splitting reactions by a molecular entity and thereby with high atom economy. In the present work an introduction is given on the principal mechanisms of natural photosynthesis and how these can be adapted in artificial systems. As light absorption is the key event to generate working photochemical devices the photophysical fundamentals of the related processes are outlined on the example of ruthenium polypyridine complexes. In this thesis the use of PMDs for the reduction of protons in aqueous solution was investigated. In a literature overview the reasons for the use of the distinct metal centres for the light absorption and catalytic processes, as well as the benefits of N-heterocyclic carbene (NHC) bridging ligands are explained. Considering these fundamentals PMDs comprised of ruthenium polypyridine photosensitisers, imidazophenanthroline (ip) based NHC bridging ligands and catalytic centres containing platinum group metals (M) were designed. The process of development of these RuRRipM systems is described: starting from the synthesis and first successful application of RuRRipM complexes as photocatalysts, over to problems in synthesis that were encountered and solved, arriving at a system that enables in situ tuning of the catalytic performance. The structure-property-correlation that can be drawn from investigations on a molecular level is the main argument for the use of PMDs as catalysts. Therefore it is important to understand fundamental photophysical and photochemical processes that are induced by light absorption. A new method that gives straightforward access to information on many of these dynamics is presented as well. Finally a conclusion is drawn on the generated results. Additionally an outlook is given on how RuRRipM systems could be further improved and the benefits of their prospective use in water splitting devices is presented.