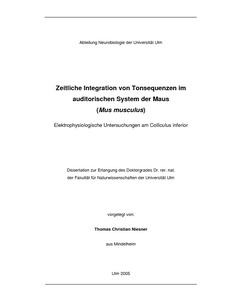 This work first presents the temporal processing of two delayed pure tone pulses in the auditory midbrain of mammals. For this, the changes of neuronal responses in the inferior colliculus (IC) of mice caused by the presentation of two delayed tone pulses were recorded. The main aspect in this work was the influence of probe frequencies (PF) to the response of a following CF-tone pulse, similar to stimuli used by forward masking experiments. Therefore, the PF had defined time delays and frequency intervals relative to the characteristic frequency (CF) of the recorded neurons. All stimuli were presented near the response threshold of the recorded neurons (10 dB above threshold). The time delays which separated the PF and the following CF-tone pulse were between 0 - 5 ms, 10 - 50 ms and 100 - 500 ms. These time delays were chosen, because they correspond to delays known from gap detection (0 - 5 ms), the differentiation of phonems in human language (10 - 50 ms) and experiments with forward masking paradigms or findings about acoustical streams or acoustical gestalts (100 - 500 ms). No correlations were found between characteristics of the recorded neurons for simultaneous presentation of the tone pulses (such as response type, shape of tuning curves, localisation of inhibitory fields relative to CF) and the temporal processing for time delayed tone pulses.