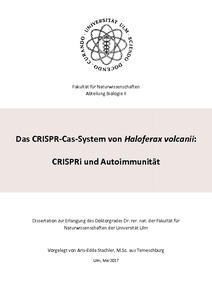 The CRISPR-Cas system is a prokaryotic adaptive, heritable immune system. The crRNA, which orchestrates the sequence-specific binding of a target sequence, constitutes a key component of the defence response. Employing mutational analyses and a Cas6b-independent system for crRNA biogenesis, important parts of the 5‘ and 3‘ handles could be identified. Results points towards an essential role of the 5‘ handle for interference, whereas the 3‘ handle is completely dispensable. Within the frame of another project the effects of CRISPR-Cas-mediated autoimmunity were analyzed in H. volcanii. Even when the expression of endogenous crRNAs was inhibited and only a crRNA against genomic DNA was present, the observed toxicity was moderate. While H. volcanii cells were being subjected to an autoimmune reaction, they showed impaired fitness, but by introducing deletions in the region of the target sequence, self-targeting was quickly abolished. In a wildtype strain synthetising all endogenous crRNAs, the expression of a crRNA against genomic DNA showed no detrimental effects. The polyploidy of H. volcanii can presumably act as a buffer against self-targeting, since damage to genomic DNA can be efficiently repaired by utilizing intact genome copies as repair templates for homologous recombination. Furthermore, an ineffective autoimmune reaction seems to lead to the acquisition of spacers originating from genomic DNA. Finally, the application of the endogenous CRISPR-Cas system of H. volcanii as a tool for repression of gene expression was established. To achieve this, the interference complex was reprogrammed with synthetic crRNAs mediating the binding of a desired target sequence. That way, the expression of a plasmid-encoded gene, several genomic genes as well as an essential gene could be inhibited. Several attempts to optimize the system revealed that the expression of a catalytically inactive Cas3-variant could further enhance the efficiency of gene repression and a shortening of the spacer sequence by 5 nt was possible, however crRNA synthesis must occur by a mechanism that generates correct ends.