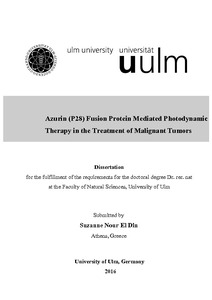 Azurin is a bacterial protein produced by Pseudomonas aeruginosa with known anticancer properties. A peptide fragment of Azurin (P28) has shown to preferentially enter cancer cells and is responsible for the antitumor effect without affecting neighboring normal cells. We monitored the uptake of EcFbFp (Escherichia coli Flavin mononucleotide binding protein) and the fusion proteins that are composed of P28 and EcFbFp in A549 and MCF7 cells lines. Furthermore, it was investigated the uptake of EcFpFp and the fusion protein using confocal microscopy and western blot. The cytotoxic effect of the combined therapy was assessed using MTT assay. A significant cytotoxic effect (<0.001) was achieved in breast and lung cancer cell lines when treating the cells with the combined therapy in comparison to blue light alone. Also a significant cytotoxic effect was obtained (<0.001) when treating the cells with the fusion proteins compared to EcFbFp. Additionally, the stability of the fusion proteins relative to pH and temperature was assessed. Finally, the amount of ROS (reactive oxygen species) was quantified using H2DCFDA. A significant amount of ROS was observed when treating both cancer cell lines with the fusion proteins and blue light relative to EcFbFp or blue light alone. Here, we propose a new photosensitizer to be used in the photodynamic therapy. This photosensitizer has the ability to target cancer cell and exert a site-specific cytotoxic effect.