Improvement of Cu(In,Ga)(S,Se)2 thin film solar cells with the help of Gallium and Sulfur gradients 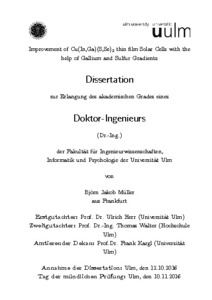 The aim of this work is to optimize the absorber for Cu(In,Ga)(S,Se)2 thin film photovoltaic cells in order to get a higher efficiency of the energy conversion in the framework of a well-established industrial process. In general the industrial process belongs to the family of two-step processes which consist of sputtering and evaporating a stack of elemental layers and subsequent annealing in order to form the chalcopyrite structure of the absorber. The two-step process stays in competition with the more flexible co-evaporation process, which up to now has delivered the best laboratory cells reaching efficiencies up to 22.6%. The motivation for the two-step process may also be derived from the achievement of the best module conversion efficiencies of almost 18%. The Shockley-Queisser limit of single junction solar cells is around 33%. The difference of 11% to the best laboratory cells can be explained by optical reflection and internal recombination losses (Auger and Shockley-Read-Hall) and is mostly reflected in open-circuit voltage losses. In order to achieve higher open-circuit voltages, conduction band V-profiles are introduced in order to reduce space-charge region and interface (buffer) recombination as well as back contact recombination. Band gap grading is most easily achieved in the co-evaporation process. Due to the fact that the stacked elemental layer process is driven by interdiffusion of elements and compounds the precise control of these V-profiles is a challenge and alternative ways to control the band gap profile need to be found. To adapt the electronic band structure to the back electrode and the transparent window via a buffer layer, a certain gradient of Ga and S in the absorber is needed. In this work, optimized temperature profiles, optimal chalcogen amounts and a modified back contact have been identified as possible parameters for improvement of solar cell performance. In the field of band gap grading in Cu(In,Ga)Se2 thin films a method was found to control the Ga/(Ga+In) profiles by the process temperature and the Se amount. This allows to optimize band gap profiles in the p-n junction solar cell with respect to more efficient charge carrier collection. With the help of numerical SCAPS simulations the optimized parameters of back and front surface grading properties can be calculated for the application in optimal process conditions. For the adjustment of S/(S+Se) profiles in Cu(In,Ga)(S,Se)2 thin films, defined concentration gradients were established by applying chalcogens with a specific ratio before the annealing process. The conventional two-step process was furthermore modified by separating the annealing step into a pure selenization and a sulfurization phase in order to better adjust the S/(S+Se) profile. A large parameter field makes a detailed study of post sulfur diffusion processes possible. However, to adjust the chalcogen profile in the thin film it was found that the most important parameters are the sulfurization temperature and the sulfurization time in step two. Furthermore, a Mo-N layer was introduced as a novel barrier layer against chalcogen diffusion to the Mo back contact. A self-limited MoSe2 layer growth on top of the Mo-N barrier layer with a defined thickness has been found, which does not hinder charge carrier collection at the back contact and additionally ensures a quasi-ohmic contact.