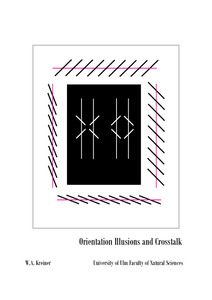 Since the Zöllner illusion, several more orientation illusions have been published. Two effects are discussed here: A rotation effect on lines or stroke patterns at small angles to one of the two principal axes of alignment (vertical or horizontal) and another rotation effect on herringbone like structures. In the small-angle-to-axis-illusion (SMOX) a single line or a pattern of parallel lines appears to be slightly rotated towards the nearest axis. This effect is attributed to the uneven distribution of orientation cells in the visual cortex, as well as to an averaging process of the signals they produce. Vertical or horizontal target lines seen above such a pattern are rotated, too. This apparent interaction is attributed to crosstalk between neural pathways processing the visual information. Beside a general example of a herringbone type illusion, as a special case the original version of the Zöllner illusion is discussed, where the strokes of each two mirrorlike patterns form an angle of 90 degrees. The perceived tilt of the parallel target lines is attributed to a size constancy effect. However, herringbone type illusions can be enhanced by the small angle rotation effect. The Hering illusion is attributed to small angle rotation as well as to a size constancy effect. Both illusions are investigated with respect to their dependence on the overall orientation of the stimulus.