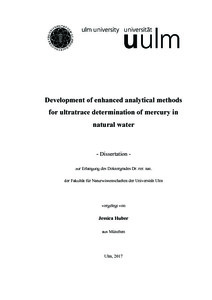 Mercury (Hg) is a ubiquitous pollutant that is emitted to the atmosphere from both anthropogenic and natural sources. Human exposure to Hg occurs mainly from consumption of contaminated fish, as Hg exhibits very high bioaccumulation in the aquatic food chain. Hence, monitoring of low Hg levels in natural water is mandatory to meet regulations. In the first part of this thesis, a fully automated prototype system for reagent-free dissolved Hg determination in aqueous samples was established. The flow injection analysis system is based on Hg preconcentration on gold nanoparticles (AuNPs) as a selective adsorbent coupled to atomic fluorescence spectrometric (AFS) detection after thermal desorption of elemental Hg. The prototype was used to determine the total dissolved Hg concentration in various real water samples. Accuracy of the proposed method was confirmed by a reference method. The developed method offers significant advantages, because no reagents are needed for sample preparation, analyte preconcentration, and desorption which minimizes the risk of contamination. This leads to a detection limit as low as 13 pg L-1. Moreover, the method provides a broad linear working range covering 5 orders of magnitude and a good reproducibility described by a relative standard deviation of 3.26%. Dissolved organic matter in natural waters might affect Hg accumulation on the AuNP-based collector leading to minor recoveries. Hence, the influence of humic and fulvic acids as well as selected organic ligands on Hg adsorption onto a AuNP-based adsorbent was systematically studied as part of this work. The obtained results confirm that thiol-based ligands have a stronger influence on Hg adsorption onto AuNPs than non-sulfur ligands. To overcome minor findings due to Hg complexation by organic compounds a fully automated online UV irradiation pretreatment procedure was developed. Accurate Hg quantification in sample solutions with a DOC concentration up to 15 mg C L-1 was achieved by adding H2O2 to the samples prior to 6 min online UV irradiation. Alternatively, online digestion based on TiO2 assisted photocatalytic decomposition of organic substances was tested and significantly improved the degradation process of humic acids. In the second part of this study, a nanogold-decorated dipstick was developed for passive sampling of Hg from water samples. The novel sampler facilitates on-site accumulation of the analyte by dipping it into the respective water body. This simplifies the sampling procedure and minimizes contamination risk due to omission of transportation and storage of liquid samples. A mesoporous-macroporous silica monolith was applied for AuNPs immobilization and further application to Hg extraction from aqueous solution. During method development the influence of blank contribution, gold loading, exposure time and sample volume were thoroughly investigated. The porous structure of the silica monolith and the deposited AuNPs were characterized by scanning electron microscopy. The applicability of the novel sampler to natural water samples was confirmed by a recovery experiment in spiked seawater with a recovery rate of 101%. Additionally, the data received from direct determination of dissolved Hg in a freshwater sample by preconcentration onto the novel dipstick agreed with a reference method. The developed method exhibits a limit of detection of 1.31 ng L-1 for an exposure time of only 1 min, featuring a good reproducibility, evidenced by a standard deviation smaller than 5.4%.