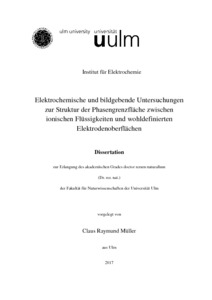 The interface between ionic liquids and noble metal electrodes of well-defined surfaces, such as those of Au(100), Ag(100), Pt(100) and synthetic graphite, also known as HOPG, was characterized using basic electrochemical methods like Cyclic Voltammetry (CV) and Electrochemical Impedance Spectroscopy (EIS). This study was coupled with imaging analysis by means of in-situ Scanning Tunneling Microscopy (in-situ STM). Attention has been focused on the difference in double layer capacitance spectra of both HOPG and Au(100), when in contact with a certain imidazolium-based ionic liquid. The capacitance spectra for the two systems exhibit similar high frequency sections, but different low frequency ones, the latter manifested by the appearance of an additional, second capacitance arc for Au(100). As demonstrated by in-situ STM images, this discrepancy can be attributed to the instability of the gold surface. The common high frequency components are characteristic features of the electrical double layer. Current-transients, measured upon forming the Au(100) | ionic liquid interface, were interpreted in the same manner: separated into short-time and long-time sections, in which the fast decay reflects the inherent property of the double layer, whereas the slow tail of the transients is due to unspecified Au-surface instability related processes.