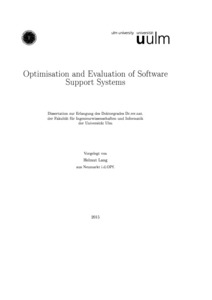 This thesis investigates the current status of help systems and user assistance available in the context of computer software usage. The focus of this thesis is on help available to users without explicitly referring to another person like a friend, a coworker, a helpline, or an e-mail support system. After introducing important concepts from the area of cognitive load theory and the usage of anthropomorphic agents in computer systems, existing help systems are reviewed with respect to their impact on users' cognitive load, and their usefulness is evaluated. Based on this evaluation we present an advanced help system implemented for a collaborative grid computing web portal. This help system is capable of assisting users at multiple levels in the interaction process and fosters efficient software usage. Following a worked examples based approach to introduce users to the user interface of the portal, it points out essential elements of the user interface required for task completion. Processing these worked examples, users quickly attain first results. Initial results are refined by users employing less important features of the user interface. The functionality of these less prominent features is learned by users following an exploratory based approach. The knowledge acquired, following the worked examples, forms the foundation to guide users during this exploratory learning process. To assist users at this stage the help system is capable of providing additional information for certain elements of the user interface. Additionally, interested users can be provided with information on related concepts not directly relevant for task completion by the help system. Different aspects of the help system are evaluated with respect to users' objective performance and subjective acceptance of the help system. Overall six experiments were performed in the context of this thesis. Comparing our advanced help system to HTML based help pages showed the superiority of our help system with respect to objective performance. Another Comparison between a help system using an anthropomorphic agent and a system showing a generic question mark symbol to represent the help system, revealed that the kind of representation used for the system had virtually no influence on the subjective ratings. Two experiments comparing systems with different levels of proactivity revealed that in general users subjectively prefer reactive help systems over help systems featuring proactive behaviour. An experiment comparing a help system employing text and mouse based interaction to a system using spoken in- and output showed that users avoid using spoken input to interact with computers in public. Increasing social pressure on users by explicitly asking them to use the speech input feature could mitigate this effect and users made use of the feature in this case. The final experiment conducted evaluated social aspects of interaction with anthropomorphic agents. By using different modalities to present the questionnaires evaluating the system, we hoped to be able to replicate the results found in literature. However, our results were not conforming to previously reported results. Accordingly, we assume that users' perspective on computers might have changed recently. Our work contributes to the area of help systems and is a first integrated step in applying the findings of cognitive load theory in the context of computer help systems. It also identifies aspects of help systems that might have detrimental effects on user acceptance.