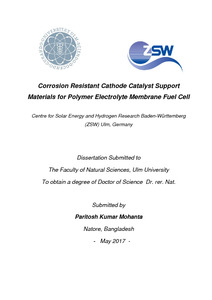 Polymer Electrolyte Membrane Fuel Cells (PEMFC) having high power density and low degradation are considered a viable option for future emission free mobility. In order to minimize the noble metal demand, platinum nanoparticles supported on a highly conductive carbon black are used as catalysts. Yet, the sensitivity of carbon based support materials to oxidation is one of the major causes of PEMFCs performance degradation. A stabilized support can increase the fuel cell life time. In this work the feasibility of corrosion resistant metal oxide based support materials for the noble metal nanoparticles in the PEMFC cathode have been investigated and compared with a widely used carbon black support. Potential non carbon supports need to provide high surface area, high electronic conductivity and stability towards the acid environment at the potentials encountered at the fuel cell cathode under steady state and transient conditions. The pure (semi) conducting metal oxides are stable but their electronic conductivities are not high enough to be used as support for noble metals in PEMFC. Appropriate amount of doping in metal oxides can increase the electronic conductivity to the desired level. In this contribution, an antimony doped tin oxide (ATO) support material has been developed which has reasonable electrical conductivity (0.7S/cm) and surface area (50m2/g). A robust process to synthesize supported platinum nanoparticles is needed to investigate the influence of support materials to the catalyst performance and stability which are highly dependent on platinum particle size and size distribution. A robust synthesis process of Pt nanoparticles of <5nm particle size has been developed by modifying the well-known polyol process. The modified process is very successful in depositing Pt nano-particles of comparable size and narrow size distribution on all types of supports which have been investigated. An annealing condition for the supported catalysts was developed since it can improve catalyst stability and activity by recrystallization of the smaller particles. Both of non-annealed and annealed supported catalysts have been characterized. Pt-particle sizes were estimated by XRD (TEM in some cases) and noble metal contents were determined by ICP-OES measurement. Electrochemical characterizations were done to measure the electrochemical surface area (ECSA) via cyclic voltammetry, Oxygen reduction reaction (ORR) activity via rotating disk electrode, Pt corrosion via load cycling and support corrosion via potential cycling. Improved corrosion resistance properties compared to the traditional carbon black support under accelerated stress test (AST) condition have been obtained from the ATO supported catalyst. It has been found in this work that the Pt corrosion not only depends on the particle size of Pt but also the types of supports. Finally, the catalysts were processed to membrane electrode assembly (MEA) to carry out single cell performance tests by measuring the current-voltage curves at defined operating conditions. It has been found that it is impossible using the same MEA -manufacturing conditions for all types of supported catalysts to achieve the optimum performance. Especially the optimum ionomer content on the catalyst layer is very much dependent on the surface area of the support materials. Low surface area supported catalyst need lower amount of ionomer in the catalyst layer and vice versa. In this work, impedance spectroscopy (EIS) which is an important tool of digenesis of fuel cell performances has been used to explain dependency of ionomer content on the cathode catalyst layers. The optimized single cell performances of the CB supported catalyst proved to be comparable to a commercially available catalyst from Tanaka. However, lower performance of the single cell with ATO supported catalysts has been found. This can be explained by catalyst-support interactions and low electronic conductivity of the pure ATO-based catalyst layer. It has also been shown in this work that the single cell performance of ATO supported catalyst can be improved by using an additional conductive layer on the top of the catalyst layers.