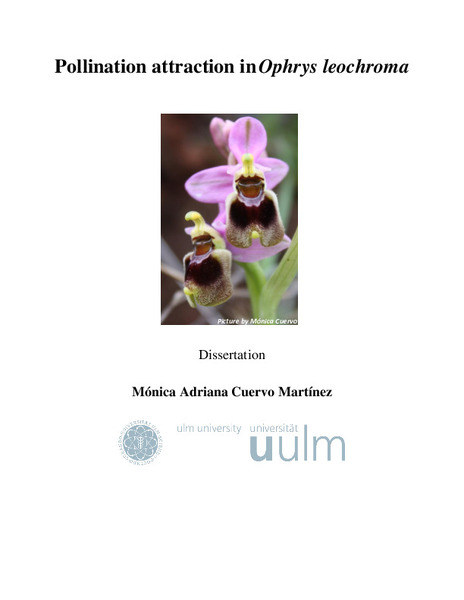 Until now few studies have investigated the Chemical Ecology and mechanisms driving pollinator attraction in Eucera- pollinated species of the O. tenthredinifera complex, although this is one of the largest species group of the genus Ophrys. Besides due to the intermediate position of the O. tenthredinifera complex between wasp- and Andrena- pollinated species groups, investigations represents a striking opportunity to study pollinator attraction in the context of intra- and inter generic pollinator shifts, radiation and diversification. In this framework, I investigated the pollinator attraction in Ophrys leochroma in Crete (Greece), a species that performs sexual deception and is pollinated by males of the longhorn bee Eucera kullenbergi. This thesis is presented in three chapters. In the first part, I analyzed pollinator/male attracting chemical compounds of O. leochroma flowers and pollinator females. I performed gas chromatography coupled with electroantennography to register electrophysiologically active compounds in the scent samples of orchids and pollinator females which were identified, using gas chromatography with coupled with mass spectrometry (GC-MS). In field bioassays I tested various odor samples of female and flowers extracts and synthetic blends. My results showed that O. leochroma mimics the sex pheromone of its pollinator, E. kullenbergi by producing medium polar ad non-polar compounds (aldehydes, alcohols, fatty acids and hydrocarbons) that elicited antennal response in male bees (electrophysiology active). Furthermore, in terms of the chemistry of pollinator attraction, Eucera-pollinated Ophrys species might represent an intermediate stage between wasp- and Andrena-pollinated species due to presence of chemical compounds intermediate between these two groups. In the second part of my thesis, I examined the intraspecific variation of male attraction scent in the sexually deceptive orchids Ophrys leochroma and females of its pollinator Eucera kullenbergi. Therefore, I performed chemical analyses (floral and females) scent collection and chemical analyses with gas chromatography with electroantennographic detection (GC-EAD), gas chromatography with coupled with mass spectrometry (GC-MS) and field bioassays with attractive (model) and non-attractive females and non-pollinated (mimic) and pollinated flowers extracts. My results showed a broad overlap of the samples of non-pollinated and pollinated flowers while the samples of attractive and non-attractive females appeared more distinct. Further, extracts of labellum of non-pollinated O. leochroma and attractive E. kullenbergi females elicited significantly higher number of male reactions among them touches and pseudocopulatory attempts in comparison to the control. Extracts of pollinated O. leochroma and non-attractive E. kullenbergi females were less attractive. My results shed lights over the intraspecific variation in the odour bouquet in mimicking systems and the selection by its pollinators. In the last part of my thesis, we explored whether and in what manner pollination effectiveness is altered by experimental manipulation of the flower form in Ophrys leochroma. Therefore, by performed manipulation of mechanically active (areas of points of the lip which pollinators use as fixed gripping or contact points during pollination) and inactive components (areas of points in which the pollinators move around freely or with which they do not come into contact during pollination) of the labellum of Ophrys leochroma, our results showed that floral form plays and essential, and so far, underestimated role in ensuring effective pollination by mechanically guiding pollinators towards the reproductive structures of the flowers. The findings of this thesis add new insights of the orchids deceptive systems in the framework of reproductive isolation and intra and inter-generic shifts of pollinators and phenotypic selection.