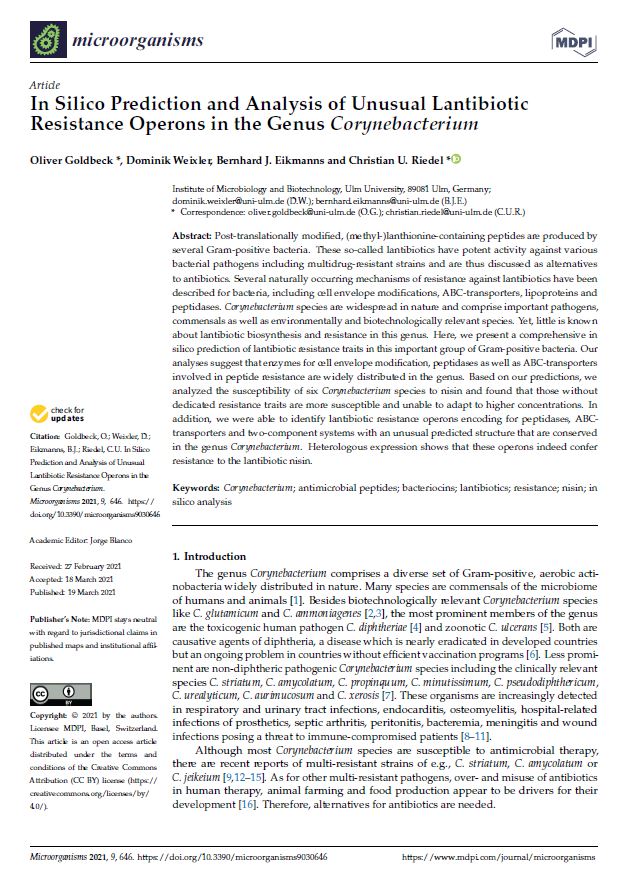 Post-translationally modified, (methyl-)lanthionine-containing peptides are produced by several Gram-positive bacteria. These so-called lantibiotics have potent activity against various bacterial pathogens including multidrug-resistant strains and are thus discussed as alternatives to antibiotics. Several naturally occurring mechanisms of resistance against lantibiotics have been described for bacteria, including cell envelope modifications, ABC-transporters, lipoproteins and peptidases. Corynebacterium species are widespread in nature and comprise important pathogens, commensals as well as environmentally and biotechnologically relevant species. Yet, little is known about lantibiotic biosynthesis and resistance in this genus. Here, we present a comprehensive in silico prediction of lantibiotic resistance traits in this important group of Gram-positive bacteria. Our analyses suggest that enzymes for cell envelope modification, peptidases as well as ABC-transporters involved in peptide resistance are widely distributed in the genus. Based on our predictions, we analyzed the susceptibility of six Corynebacterium species to nisin and found that those without dedicated resistance traits are more susceptible and unable to adapt to higher concentrations. In addition, we were able to identify lantibiotic resistance operons encoding for peptidases, ABC-transporters and two-component systems with an unusual predicted structure that are conserved in the genus Corynebacterium. Heterologous expression shows that these operons indeed confer resistance to the lantibiotic nisin.