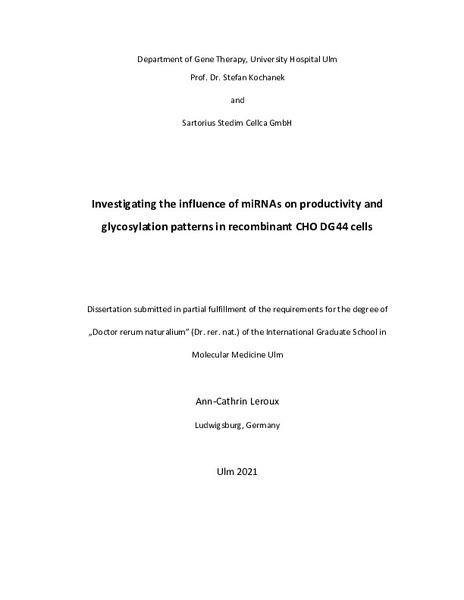 Since the approval of recombinant human plasminogen activator in 1987, the first protein commercially expressed in Chinese hamster ovary (CHO) cells, there have been tremendous improvements in biopharmaceutical production concerning cell line development, cell culture media and cultivation techniques resulting in productivities exceeding 10 g/L. Today, cell line development is not only focusing on productivity levels but also on product quality. Especially the N-glycosylation pattern is important as it determines pharmacokinetics and pharmacodynamics of a recombinant product and plays a pivotal role for the development of biosimilars. Optimization of cell line performance can be achieved by various approaches, e.g. host cell line or expression vector modifications. The latter includes for example stronger promoters, chromatin opening elements, mRNA stabilizing elements or signal peptides. In recent years, also miRNAs have been applied as tool to improve the productivity of cell lines, at least for difficult-to-express proteins. MiRNAs are small, about 22 nucleotides long RNAs that regulate gene expression. A specific miRNA can bind several target mRNAs leading to translational repression or mRNA degradation. The present study investigated whether miRNAs can be used as a tool to further increase productivities of high-expressing cell lines and to optimize the glycosylation pattern of the recombinant protein. For that purpose, next generation sequencing of small RNAs was performed on 24 CHO DG44 cell lines producing recombinant antibodies. The resulting miRNA expression patterns were subjected to bioinformatic analyses in order to find correlations with high productivity as well as low galactosylation, fucosylation or mannosylation of the antibody. In that way, 30 interesting miRNAs were identified and stably overexpressed in antibody producing CHO DG44 cell lines to verify a potential impact on cell performance. However, none of these miRNAs seemed to have an effect on productivity, growth or the glycosylation pattern. However, further transient testing using miRNA mimics revealed five miRNAs - miR-30c, miR-30e, miR-16 and two novel miRNAs - that reduced galactosylation significantly from 40 % to 36 %. In a further set of experiments, it could be demonstrated that miRNA function seems to be dependent on the cultivation mode, as miR-1 mediated downregulation of TWF1 mRNA was visible in transient and stable batch expression but not during fed-batch cultivation. In conclusion, the overexpression of some specific miRNAs was shown to influence the glycosylation pattern of recombinant CHO DG44 producer cells. However, the observed effects are marginal and thus of limited relevance for cell line engineering, especially as an impact could only be detected on transient level. The identified correlations between miRNA expression and productivity or distinct glycosylation patterns did not have a cause-effect relationship for most miRNAs, highlighting the importance of biological testing upon expression pattern and correlation analyses. Interestingly, it was observed that miRNA function seems to be dependent on the cultivation mode. This is of utmost importance when working on miRNA function evaluation with the goal to apply miRNAs as engimiRs, as most miRNA function studies rely on transient testing in batch mode. However, the present data imply, that miRNAs have to be tested in the cultivation environment that is used in the final application, e.g. fed-batch bioprocess with a stably expressing cell clone for biopharmaceutical production.