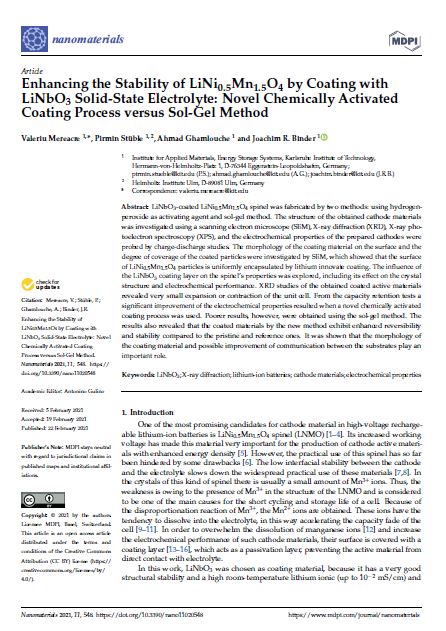 LiNbO3-coated LiNi0.5Mn1.5O4 spinel was fabricated by two methods: using hydrogen-peroxide as activating agent and sol-gel method. The structure of the obtained cathode materials was investigated using a scanning electron microscope (SEM), X-ray diffraction (XRD), X-ray photoelectron spectroscopy (XPS), and the electrochemical properties of the prepared cathodes were probed by charge-discharge studies. The morphology of the coating material on the surface and the degree of coverage of the coated particles were investigated by SEM, which showed that the surface of LiNi0.5Mn1.5O4 particles is uniformly encapsulated by lithium innovate coating. The influence of the LiNbO3 coating layer on the spinel’s properties was explored, including its effect on the crystal structure and electrochemical performance. XRD studies of the obtained coated active materials revealed very small expansion or contraction of the unit cell. From the capacity retention tests a significant improvement of the electrochemical properties resulted when a novel chemically activated coating process was used. Poorer results, however, were obtained using the sol-gel method. The results also revealed that the coated materials by the new method exhibit enhanced reversibility and stability compared to the pristine and reference ones. It was shown that the morphology of the coating material and possible improvement of communication between the substrates play an important role.