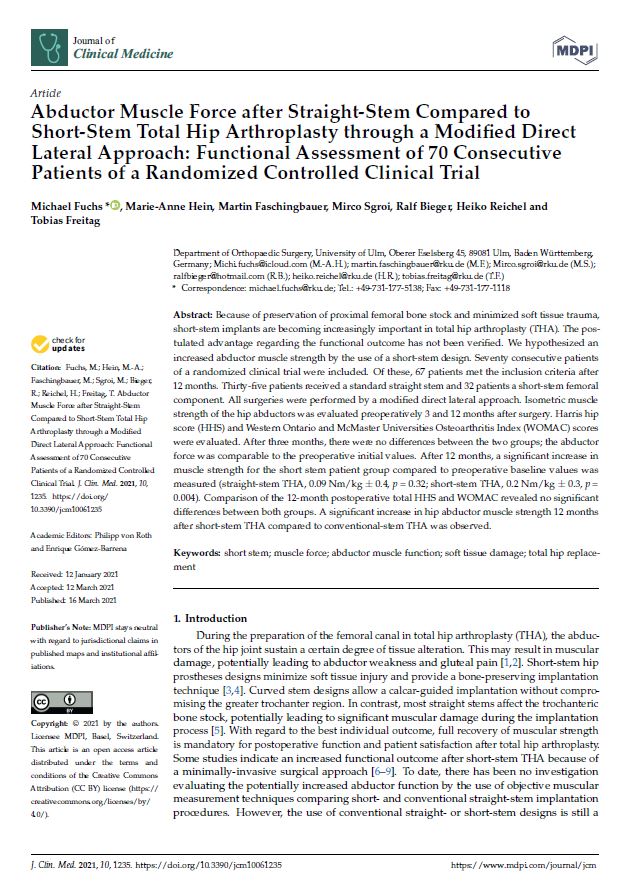 Because of preservation of proximal femoral bone stock and minimized soft tissue trauma, short-stem implants are becoming increasingly important in total hip arthroplasty (THA). The postulated advantage regarding the functional outcome has not been verified. We hypothesized an increased abductor muscle strength by the use of a short-stem design. Seventy consecutive patients of a randomized clinical trial were included. Of these, 67 patients met the inclusion criteria after 12 months. Thirty-five patients received a standard straight stem and 32 patients a short-stem femoral component. All surgeries were performed by a modified direct lateral approach. Isometric muscle strength of the hip abductors was evaluated preoperatively 3 and 12 months after surgery. Harris hip score (HHS) and Western Ontario and McMaster Universities Osteoarthritis Index (WOMAC) scores were evaluated. After three months, there were no differences between the two groups; the abductor force was comparable to the preoperative initial values. After 12 months, a significant increase in muscle strength for the short stem patient group compared to preoperative baseline values was measured (straight-stem THA, 0.09 Nm/kg ± 0.4, p = 0.32; short-stem THA, 0.2 Nm/kg ± 0.3, p = 0.004). Comparison of the 12-month postoperative total HHS and WOMAC revealed no significant differences between both groups. A significant increase in hip abductor muscle strength 12 months after short-stem THA compared to conventional-stem THA was observed.