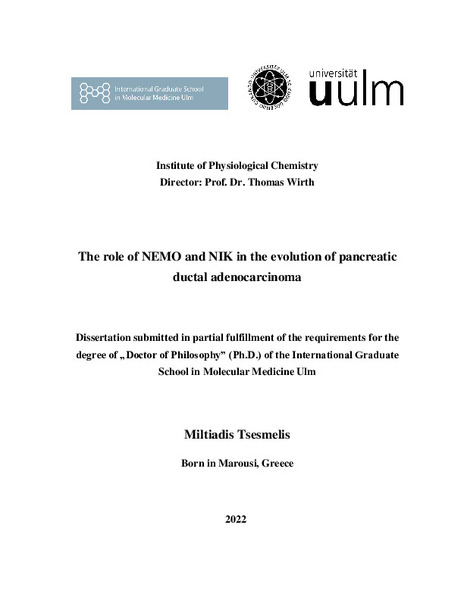 Pancreatic ductal adenocarcinoma (PDAC) remains one of the deadliest types of cancer with a 5-year survival rate of 9% and is expected to be the second leading cause of cancer-related deaths in the USA by 2030. The high mortality of PDAC is attributed to the lack of efficient biomarkers for early detection and importantly to its high metastatic properties. PDAC arises from precancerous lesions namely pancreatic intraepithelial neoplasias (PaNINs). PanINs are divided into individual grades which can be categorized into two groups: low-grade PanINs (PanIN1A, Pan- INB) and high-grade PanINs (PanIN2, PanIN3). Low-grade PanINs are characterized by point mutations of the KRAS oncogene while accumulation of additional mutations including inactivating mutations on p53 promotes the progression of low-grade PanINs to high-grade PanINs and eventually to PDAC. The NF-κB pathways (both canonical and non-canonical) are regulating critical cellular functions and have been associated with the development and progression of precancerous pancreatic lesions and PDAC as well as with the establishment of metastasis in different types of cancer.