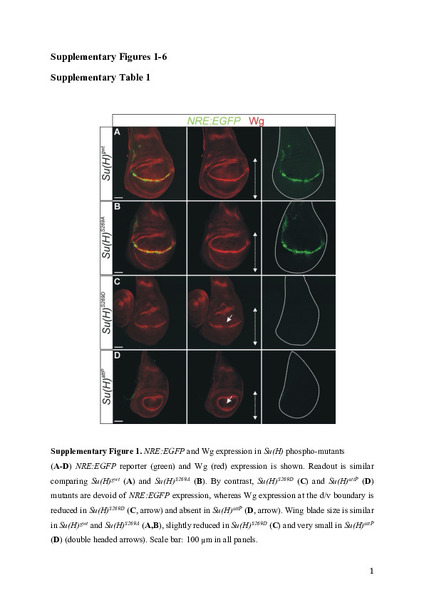 The highly conserved Notch signaling pathway controls a multitude of developmental processes including hematopoiesis. Here, we provide evidence for a novel mechanism of tissue-specific Notch regulation involving phosphorylation of CSL transcription factors within the DNA-binding domain. Earlier we found that a phospho-mimetic mutation of the Drosophila CSL ortholog Suppressor of Hairless [Su(H)] at Ser269 impedes DNA-binding. By genome-engineering, we now introduced phospho-specific Su(H) mutants at the endogenous Su(H) locus, encoding either a phospho-deficient [Su(H)S269A] or a phospho-mimetic [Su(H)S269D] isoform. Su(H)S269D mutants were defective of Notch activity in all analyzed tissues, consistent with impaired DNA-binding. In contrast, the phospho-deficient Su(H)S269A mutant did not generally augment Notch activity, but rather specifically in several aspects of blood cell development. Unexpectedly, this process was independent of the corepressor Hairless acting otherwise as a general Notch antagonist in Drosophila. This finding is in agreement with a novel mode of Notch regulation by posttranslational modification of Su(H) in the context of hematopoiesis. Importantly, our studies of the mammalian CSL ortholog (RBPJ/CBF1) emphasize a potential conservation of this regulatory mechanism: phospho-mimetic RBPJS221D was dysfunctional in both the fly as well as two human cell culture models, whereas phospho-deficient RBPJS221A rather gained activity during fly hematopoiesis. Thus, dynamic phosphorylation of CSL-proteins within the DNA-binding domain provides a novel means to fine-tune Notch signal transduction in a context-dependent manner.