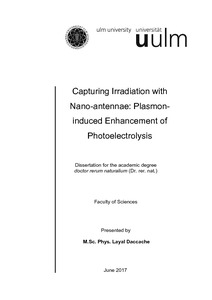 Optimal harvesting of the natural solar spectrum for water splitting applications has led to adapting inadequate wide band gap semiconductors. Traditionally, this procedure has been widely explored in the past decades, mostly by depositing nano-sized noble metal co-catalyst particles onto massive semiconducting photoanodes for facilitating the sluggish oxygen evolution reaction, requiring four electrons, and being the bottleneck of water photoelectrolysis. In the conventional design of optimized band gap photoanodes, the catalytic properties of the deposited nanoparticles have played a major role. Electro-catalytically active metals which are also transition metals, are well known for their advanced plasmonic and optical properties, as spectacularly manifested in effects such as those observed by shining light through a cathedral’s stained glass, or into the Lycurgus cup. A systematic exploitation of synergies between the plasmonic activity of the noble metal co-catalyst and the semiconductor component of the photoanode is of wide and renewed interest. The present work may be seen as a further contribution in this recent research direction. Moving away from the traditional design principles, the metallic component of the present photoanode is an extended (Au) film, nanostructured by a regular array of spherical voids, with dimensions comparable to the wavelengths in the visible spectrum (500 – 600 nm). The semiconductor component (TiO2) is deposited onto this underlying gold support possessing a refined nano-antennae structure, closely mirroring the periodicity of the support. In the ideal case, the semiconducting layer would form a system of identical, regularly placed pillars, separated by voids in the substrate, exposing clean spherical segment voids (SSV). The rationale behind this engineered structure is the possibility of enhanced performance by injecting the plasmonic activity of the Au-substrate into the semiconducting subsystem by close proximity effects.