Influence of link structure, interaction potential and the primary sequence on the conformation properties of protein-like copolymers: computer simulation 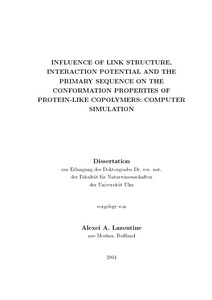 Nowadays functional polymers tend to solve more and more complex problems, e.g. controlled drug release, various external fields sensitivity. Biopolymers (proteins, DNA, RNA) take special place among them in complexity of solved problems. It caused substantially by their unique sequence of monomeric units where the sequences of majority of synthetic polymers have a Marcovian statistics. The range of use of polymers could be expanded farther via sequence formation in synthetic copolymers. A technique for synthesis of copolymers called conformation-dependent sequence design was suggested some time ago. The base of the technique is the following: units are modified on the base of their position in specifically chosen conformation. Copolymers with sequence designed in such way have different macroscopic characteristics in comparison with random copolymers. The present work is aimed at further development of the influence of three different modifications of the model on conformational properties of polymer. That influence is investigated. 1. Other rules of using the 'parent' globular conformation for the preparation of the primary sequence. The scheme of primary sequence design uses the principle of flat layer separation in the center of the globule conformation. The system of this copolymer shows the restorations of elements of microstructure. 2. Introduction of other interaction types in addition to the routinely used volume interaction can influence the properties of the synthesized polymers. Several models of saturating bond, which has some properties of hydrogen bond, were used. 3. Accounting for the details of monomer structure in the model. The aggregation behavior of copolymers in the frame of a model considering amphiphilic nature of monomeric units usually considered hydrophilic was studied in this work. This model confirms a qualitative difference between the copolymers with different statistics.