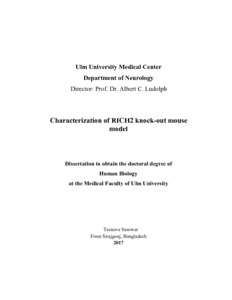 The post-synaptic densities (PSD) in the dendritic spines are functional units of signal transduction, structural stability, neuronal morphogenesis and synaptic activity. Many neurological and psychiatric disorders have been characterized in terms of the alteration of signaling, structural and functional molecules in PSD. Different types of proteins e.g. scaffolding proteins, adhesion proteins, cytoskeletal proteins, signaling molecules, and small GTPases interact with each other at the PSD. In consequence, disruption of these interactions leads to abnormal structure of spines and behavioral phenotypes. Shank3, a major scaffolding protein, is very well characterized in terms of synaptopathy and mutation in Shank3 has been associated with Autism Spectrum Disorders (ASD). On a proteomic screen, the RICH2 (RhoGAP interacting with CIP4 homologue 2) protein was identified as an interaction partner of Shank3. RICH2 is a brain specific PSD protein comprising three domains- an N-BAR domain, a RhoGAP domain and a C-terminal PDZ domain. Here, we have generated and characterized a mouse model which lacks all the isoforms of RICH2. Deletion of RICH2 results in alteration in synaptic protein, receptors and signaling molecules. RICH2 deletion alters the spine morphology in brain-specific and small GTPase-specific manner. Deletion of RICH2 enhances Rac1 and Cdc42 small GTPase signaling in hippocampus, which is accompanied by shift in spine shape from mushroom shaped spine towards multiple branched shape spine and increase in actin polymerization. In contrast, deletion of RICH2 shifts the morphology of the spines towards filopodia shape in amygdala, along with increased RhoA signaling and decrease in actin polymerization. Behaviorally, RICH2 deletion leads to increase in stereotypic behavior, impaired motor learning and object neophobia. Additionally, knockout of RICH2 alters the synaptic signaling in cell culture and cFos activation in amygdala. This study points towards the importance of fine tuning mechanism among scaffolding protein, small GTPase signaling, actin and other synaptic proteins to ensure proper functioning of synapses.