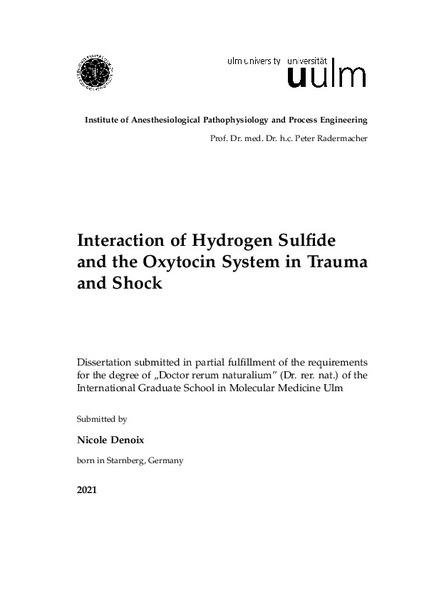 Physical trauma, like circulatory shock and acute brain injury, are the most frequent causes for intensive care unit (ICU) admission and they share key pathophysiological events like barrier dysfunction, inflammation, and oxida- tive stress. ICU patients with chronic cardiovascular co-morbidities, often need prolonged ICU treatment and hospitalization and have a higher morbidity and mortality. There is growing awareness that psychological trauma is a risk factor for developing cardiovascular co-morbidities, and that the ICU admission of critically ill patients, can induce long-term psychological impairments. However, pre-clinical short-term studies in young, healthy, un-resuscitated rodents often do not reflect the pathophysiology of comorbid ICU patients, and thus, often fail to translate beneficial findings into the clinics. Therefore, in this thesis, long-term studies were performed in clinically relevant pig models, two of which had pre-existng atherosclerosis. The pig, as a model, is well established in the ICU and additionally presents with a variety of advantages, as e.g. human-like: size, anatomy, inflammatory- and redox profile. Hydrogen sulfide (H2S) and oxytocin (OT) assume importance in both, physical and psychological trauma, inasmuch through mediating antioxidant, anti- inflammatory, neuro- and vasculo-protective effects and regulating heart rate, blood pressure and blood volume. Therefore, the role of the cardiac and cerebral H2S and OT systems in circulatory shock and acute subdural hematoma (ASDH) were elucidated. Since there is a lack of readily available antibodies for immunohistochemical detection of pathophysiological changes on porcine tissue, thirteen antibodies, targeting the H2S and OT systems and markers of injury, were validated for their specific reactivity on porcine heart and brain tissue. In the septic heart, parallel reduction of cystathionine-γ-lyase (CSE), oxytocin receptor (OTR) and glucocorticoid receptor (GR) expression was associated with lower signaling of GR related genes and lower nuclear factor (erythroid-derived 2)-like 2 (Nrf2) messenger ribonucleic acid (mRNA). This study was the first to show cardiac GR expression in relation to septic cardiomyopathy in pigs with atherosclerosis. In the paraventricular nuclei (PVN), CSE, cystathionine-β-synthase (CBS), OT, and the OTR co-localized in the magnocellular neurons after resuscitated hemorrhagic shock (HS). HS lead to only minor perivascular edema, revealed by neuro-histopathological evaluation of cortico-subcortical areas. We could not detect an effect of sodium thiosulfate (Na2S2O3), more than likely, due to an inability to cross the blood brain barrier (BBB), as observed in humans. In the ASDH project: the H2S and OT systems were shown, for the first time, to be expressed at the base of the sulci. In the injured prefrontal cortex, CSE was downregulated at the base of the sulci and associated with barrier dysfunction, edema, perivascular swelling, oxidative and nitrosative stress, in contrast to the OTR, OT and CBS, which were upregulated in comparison to the uninjured. The translational value of the findings is strengthened by the fact that CSE and the OTR were localized in the same cell types as in the human brain. Traumatic brain injury (TBI) and admission to the ICU are associated with the risk of developing post traumatic stress disorder (PTSD). Both, TBI and PTSD are associated with prefrontal cortex dysfunction. The cerebral dysregulation of the OTR and altered sulfide homeostasis in the prefrontal cortex are associated with psychological disorders. Thus, the localization of the H2S and the OT systems in the prefrontal cortex of the ASDH model is significant with regards to TBI-induced PTSD. Na2S2O3 might be a viable treatment for ASDH, since a disrupted BBB would allow it to enter the brain and the site of injury. In the ASDH model, both the spatial injury pattern, at the base of the sulci, and the immune reaction, reflected the human response to injury. In conclusion, it was particularly significant that the gyrencephalic anatomy of the pig brain allowed to show for the first time an injury pattern at the base of the sulci, which has been so far only shown in humans.