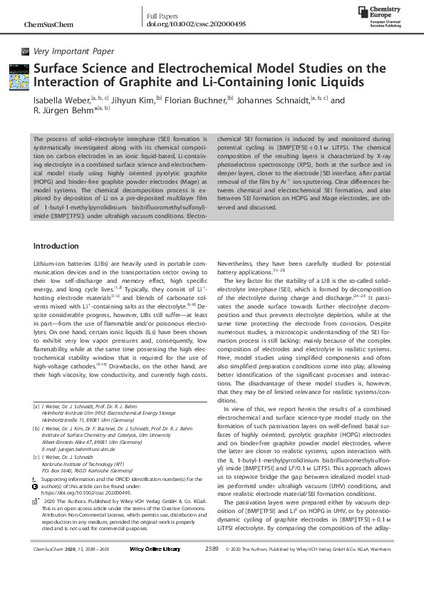 nterphase formation during Li post-deposition on multilayers of the ionic liquid (IL) 1-butyl-1-methylpyrrolidinium bis(trifluoromethylsulfonyl)imide ([BMP][TFSI]) on highly oriented pyrolytic graphite is studied under vacuum and during electrochemical cycling of graphite electrodes in Li+-containing [BMP][TFSI] by using X-ray photoelectron spectroscopy. [BMP]+ decomposition occurs preferentially during Li0-induced IL decomposition, whereas electrochemical cycling leads to [TFSI]− reduction. he process of solid–electrolyte interphase (SEI) formation is systematically investigated along with its chemical composition on carbon electrodes in an ionic liquid-based, Li-containing electrolyte in a combined surface science and electrochemical model study using highly oriented pyrolytic graphite (HOPG) and binder-free graphite powder electrodes (Mage) as model systems. The chemical decomposition process is explored by deposition of Li on a pre-deposited multilayer film of 1-butyl-1-methylpyrrolidinium bis(trifluoromethylsulfonyl)imide ([BMP][TFSI]) under ultrahigh vacuum conditions. Electrochemical SEI formation is induced by and monitored during potential cycling in [BMP][TFSI]+0.1 m LiTFSI. The chemical composition of the resulting layers is characterized by X-ray photoelectron spectroscopy (XPS), both at the surface and in deeper layers, closer to the electrode|SEI interface, after partial removal of the film by Ar+ ion sputtering. Clear differences between chemical and electrochemical SEI formation, and also between SEI formation on HOPG and Mage electrodes, are observed and discussed.