Visualization of the Gödel universe 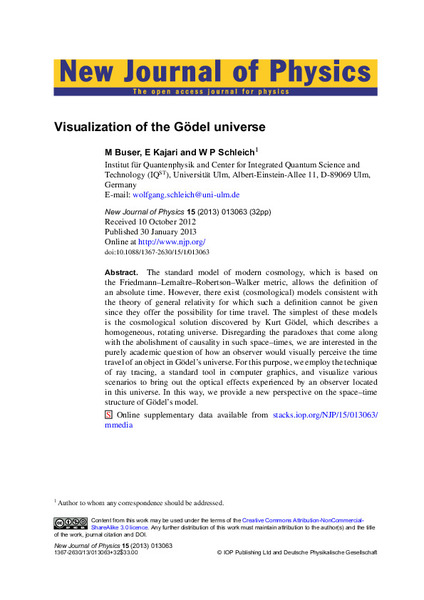 The standard model of modern cosmology, which is based on the Friedmann–Lemaître–Robertson–Walker metric, allows the definition of an absolute time. However, there exist (cosmological) models consistent with the theory of general relativity for which such a definition cannot be given since they offer the possibility for time travel. The simplest of these models is the cosmological solution discovered by Kurt Gödel, which describes a homogeneous, rotating universe. Disregarding the paradoxes that come along with the abolishment of causality in such space–times, we are interested in the purely academic question of how an observer would visually perceive the time travel of an object in Gödel's universe. For this purpose, we employ the technique of ray tracing, a standard tool in computer graphics, and visualize various scenarios to bring out the optical effects experienced by an observer located in this universe. In this way, we provide a new perspective on the space–time structure of Gödel's model.