Determining the optical properties of apple tissue and their dependence on physiological and morphological characteristics during fruit maturation. Part 2: Mie's theory 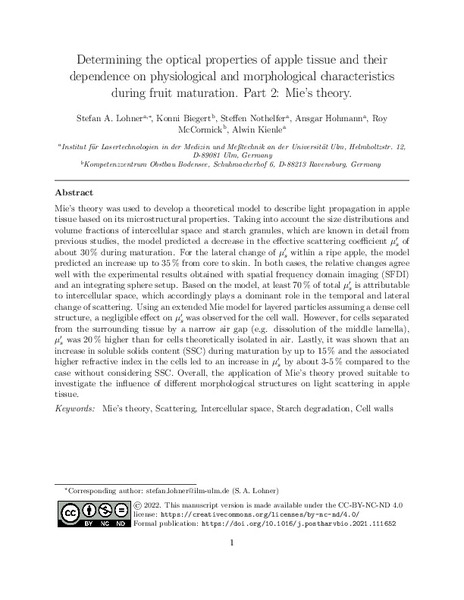 Mie's theory was used to develop a theoretical model to describe light propagation in apple tissue based on its microstructural properties. Taking into account the size distributions and volume fractions of intercellular space and starch granules, which are known in detail from previous studies, the model predicted a decrease in the effective scattering coefficient µ's of about 30 % during maturation. For the lateral change of µ's within a ripe apple, the model predicted an increase up to 35 % from core to skin. In both cases, the relative changes agree well with the experimental results obtained with spatial frequency domain imaging (SFDI) and an integrating sphere setup. Based on the model, at least 70 % of total µ's is attributable to intercellular space, which accordingly plays a dominant role in the temporal and lateral change of scattering. Using an extended Mie model for layered particles assuming a dense cell structure, a negligible effect on µ's was observed for the cell wall. However, for cells separated from the surrounding tissue by a narrow air gap (e.g. dissolution of the middle lamella), µ's was 20 % higher than for cells theoretically isolated in air. Lastly, it was shown that an increase in soluble solids content (SSC) during maturation by up to 15 % and the associated higher refractive index in the cells led to an increase in µ's by about 3-5 % compared to the case without considering SSC. Overall, the application of Mie's theory proved suitable to investigate the influence of different morphological structures on light scattering in apple tissue.