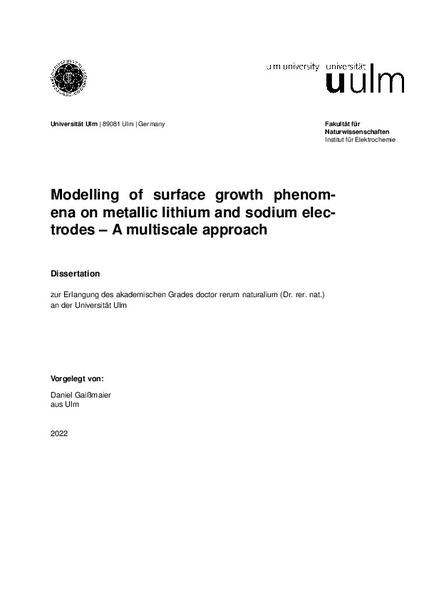 The work was motivated to gain an in-depth understanding of the initial surface growth phenomena on metallic Li and Na electrodes. For this purpose, an ab initio based multi-scale approach was developed to evaluate the ongoing processes on different time and length scales. First, both metals' bulk and surface properties were studied on the atomistic level utilising density functional theory (DFT). The standard deviation of the resulting energetic quantities was computed from an ensemble of 2000 DFT functionals employing the BEEF-vdW functionals. In the bulk study, lattice constants, cohesive energies and bulk moduli of different crystal structures were determined, which are crucial quantities for the subsequent parameterisation of the reactive force field potential. Next, the surface properties of the low-index surfaces were investigated. From these calculations, surface energies, adsorption energies of different adsorption sites, and dimer interaction energies were derived. In this way, the most stable surface facets and the preferred binding sites on the respective surfaces of both metals were found, and the interaction properties between adatoms were analysed. For a fundamental understanding of the initial processes of surface growth phenomena, we studied well-chosen diffusion events on perfect and imperfect surface structures within the Terrace Step Kink (TSK) model. For this purpose, Nudged elastic band (NEB) calculations were performed to determine the minimum energy path (MEP) of the respective reaction pathway. Additionally, the vibration modes of the initial, transition and final state were computed. This enabled us to derive the activation energies, pre-exponential factors, reaction rates, and activation energies for the respective diffusion events. With these quantities, it is possible to gain insights into the thermodynamics and kinetics of the ongoing surface formation and transformation processes. The performed DFT studies demonstrated that the self-diffusion processes on sodium and lithium have low activation energies of less than 0.5 eV. Given the attractive interactions between adjacent adatoms, island-like surface growth can be expected for both systems. By considering diffusion via exchange mechanism, it could be shown that terrace self-diffusion is insufficient to be the postulated descriptor for dendritic growth in batteries. It also demonstrated the crucial role of exchange processes for surface growth phenomena on both metal systems. DFT studies, however, are limited to systems of a few hundred atoms and simulation times of several picoseconds due to their high computational cost. ReaxFF overcomes these limitations and enables large-scale (up to 100000 atoms) simulations on extended time scales ~ns of more complex systems. The main challenge was the precise parameterisation of the ReaxFF potential function to appropriately reproduce the minor energy differences between the individual diffusion processes. An accurate representation of the diffusion events is crucial for the simulation of surface growth phenomena. Thus, in this work, the KVIK optimisation framework was developed for efficient and accurate reactive force field parameter training of solid-state systems. For this purpose, various transition state tools were initially implemented in the standalone ReaxFF framework of the Amsterdam Modeling Suite. The introduced methods facilitate the transfer of the previously obtained DFT structures and are required for the new force field training routine. Besides the bulk properties, the adsorption and surface properties, as well as the diffusion and vibration properties of the system, are included in the force field training set. Evolutionary algorithms were introduced for the optimisation of the ReaxFF parameters. A study on mathematical benchmark functions proved the superior exploration capabilities of the evolutionary algorithms (EAs) over the sequential one-parameter parabolic interpolation (SOPPI) approach. Subsequently, a reactive force field for Li-Li, Na-Na and Li-Na interactions was parameterised using the previously obtained DFT data and the developed KVIK optimisation framework. The resulting ReaxFF potential function parameter set reproduces successfully relative energy results from the DFT reference data set within the standard deviation range established by the error estimation routine of the BEEF-vdW density functional. The designed training routine successfully prevents overfitting of the parameters while maintaining a high transferability of the reactive force field. Finally, a multi-scale model was applied to gain preliminary insights into the surface growth phenomena on the stable surfaces of both metals using Monte Carlo (MC) approaches. First, the thermodynamically driven surface growth on different Li- and Na-nanoparticles was investigated within the framework of a coupled ReaxFF/Grand Canonical Monte Carlo (GCM) approach. Here, a homogeneous growth behaviour of the depositing metal atoms on the individual particles could be found. The calculated RDFs showed sharp peaks, indicating the long-range ordering of the atoms in a crystalline structure. Kinetic Monte Carlo simulation has been used to investigate the influence of surface kinetics on the surface growth phenomena. The required activation energies and pre-exponential factors of the diffusion events were calculated using the developed ReaxFF potential and the implemented transition state tools. Nucleation and aggregation on Na(100) and Li(100) were investigated, and temperature- and cover-dependent diffusion constants were derived. The study highlighted the crucial role of the exchange mechanism in the growth and transformation of the metallic surfaces of sodium and lithium. Both Monte Carlo approaches indicated a homogeneous surface growth on pure sodium and lithium surfaces. No evidence could be found on the different time and length scales that would indicate a purely intrinsic property of both metals to form inhomogeneous surface morphologies. Therefore, other influences must be considered to simulate dendritic growth at an atomistic level. As such, we demonstrated in a further DFT study the high impact on the morphology of metallic lithium surfaces in the presence of oxygen and hydrogen. Here, the formation of surface clusters and a resulting formation of an amorphous surface structure was observed. The proposed KVIK optimisation framework can be adapted in future work for efficient and improved optimisation of reactive force fields for different solid-state systems. The developed reactive force field enables further in-depth studies for metallic sodium and lithium electrodes in batteries. Further development of the ReaxFF/kMC approach could provide new insights into dendritic growth on an atomistic level. Also, a detailed study of the ongoing processes at the solid-electrolyte interface is feasible by expanding the developed force field with existing parameter sets for standard electrolyte systems.