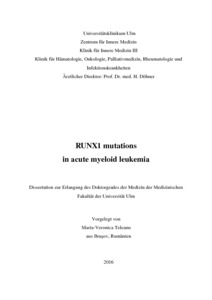 Acute myeloid leukemia (AML) is characterized by a great cytogenetic and molecular genetic diversity. Past years research has shed more light on the molecular background of the disease and identified new mutations and pathways, for example NPM1 and FLT3 mutations that allowed a more precise prognostic stratification beyond cytogenetics and opened the way to targeted therapies. This study aimed to characterize the role of RUNX1 mutations in AML focusing on the distribution of RUNX1 mutations among different WHO categories of AML, identifying cytogenetic and molecular markers associated with RUNX1 mutations and evaluating their clinical impact. To this aim, a total of 2439 adult AML patients enrolled treatment trials of the German-Austrian Study Group (AMLSG) were analyzed for RUNX1 mutations using Sanger sequencing. Overall, 280 RUNX1 mutations were detected in 245 (10 %) of 2439 AML patients. The majority of mutations clustered in exon 4 (n=81, 28.9 %) and exon 8 (n=63, 22.5 %). Approximately half of the RUNX1 mutations (49.6 %) were located in the Runt homology domain (RHD) and 40 % in the transactivation domain (TAD). Frameshift mutations prevailed in the TAD and missense mutation in the RHD. Regarding clinical characteristics, compared to patients with RUNX1 wildtype patients, RUNX1 mutated patients presented with more advanced age (59.2 years vs 53.6 years), had more immature FAB morphology (FAB M0) and secondary AML evolving from myelodysplastic syndrome. In the current category of “AML with recurrent genetic abnormalities” of the WHO 2008 Classification, RUNX1 mutations were largely mutually exclusive of all recurrent genetic abnormalities. We identified a significant association between RUNX1 mutation and abnormalities of chromosome 7 (-7/7q-) and trisomy 13. Molecular markers significantly associated with RUNX1 mutations were mutations in the epigenetic modifiers ASXL1, IDH2 and KMT2A. Among combined genotypes, the RUNX1mut/ASXL1mut genotype conferred a particularly poor prognosis. A significant finding was the high rate of resistant disease after double induction (41 %) for the RUNX1 mutated patients. In univariable analysis, RUNX1 mutations were a negative prognostic factor for all survival endpoints, whereas in multivariable analysis only event-free survival retained significance. For young patients eligible for allogeneic hematopoietic cell transplantation, a benefit in terms of prolonged relapse-free survival was found suggesting that allogeneic transplantation may be a therapeutic option for selected patients with RUNX1 mutations. The results of the present study identified RUNX1 as one of the most frequently mutated genes in AML. AML with RUNX1 mutations have distinct clinical and biological characteristics and may be considered as a genetic lesion defining a novel disease entity.