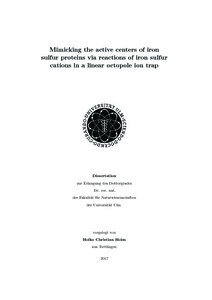 Metalloproteins are ’macromolecular machines’ and cover a vast amount of important functions which are essential for all living organisms. Proteins are able to transduce signals, replicate DNA, or catalyze chemical reactions. Iron-sulfur clusters represent the central component of many proteins and are important for their biological activity. This work presents a completely new access to different stoichiometric FexSz+ (x = z) and non-stoichiometric FexSz+ (x = z + 1) iron-sulfur clusters via ion trap experiments and provides insight into the interaction of iron-sulfur clusters with small molecules which are involved in enzyme reactions (N2, D2 and O2). Furthermore, the investigations introduce the first step of increasing the cluster complexity with the reaction of iron-sulfur clusters with H2S. The clusters for the ion trap reactivity experiments are produced by sputtering targets with high energetic xenon ions. In the first step, a screening of different targets composed of various iron and sulfur compositions and pyrite stone targets were conducted to understand the iron-sulfur cluster formation. It was found that an increase of the sulfur content in the target up to a certain point leads to the formation of pure iron-sulfur clusters and to a significant suppression of contaminants like oxygen. Surprisingly, oxygen contaminants do not play a role for the cluster production from pyrite targets leading to the generation of pure stoichiometric (FexSz+, x = z) as well as one sulfur atom deficient (FexSz+, x = z + 1) clusters. In a first set of ion trap experiments, temperature dependent reactivity studies of FexSz+ (x = z = 2, 3, 4) with N2 were performed to gain insight into the fundamental processes of the nitrogen fixation. Interestingly, Fe2S2+ and Fe3S3+ bind molecular nitrogen at room temperature, whereas Fe4S4+ binds N2 merely at low temperatures. Experimentally determined N2 binding energies are also presented and supported by calculations of Uzi Landmann and Robert N. Barnett. Further temperature dependent reactivity experiments of Fe2S2+ and Fe4S4+ with D2 showed that molecular deuterium adsorbs only at cryogenic temperatures at both cluster sizes. This indicates very weak binding energies. In a further set of experiments, different iron-sulfur clusters have been exposed to O2. Molecular oxygen can inactivate the catalytic activity of an enzyme by disintegration of iron-sulfur clusters. The O2 pressure dependent experiments show an exchange of the cluster sulfur atoms with oxygen atoms in the case of Fe2S2+, Fe3S3+, Fe5S5+ and Fe6S6+, whereas in the case of Fe4S4+, most interestingly, no S/O exchange was observed. Moreover, to mimick the chemical environment of iron-sulfur clusters in proteins and thus the sulfur connection of cysteines to iron-sulfur clusters, the reactivity of different iron-sulfur clusters towards H2S was investigated. It was found that the formation of iron-sulfur-hydrogen complexes depends merely on the number of iron atoms in the initial cluster. For example, the reaction of Fe+ or FeS+ leads to the same complex composition. Interestingly, the formed iron to sulfur ratio of the complexes is identical to the iron to sulfur ratio of iron-sulfur clusters in proteins which are connected to the cysteins via sulfur atoms.