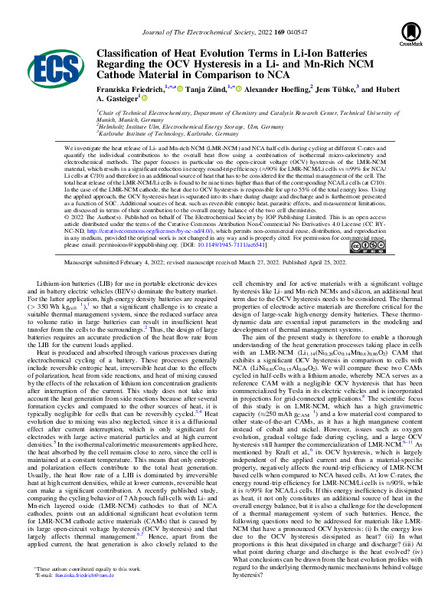 We investigate the heat release of Li- and Mn-rich NCM (LMR-NCM) and NCA half-cells during cycling at different C-rates and quantify the individual contributions to the overall heat flow using a combination of isothermal micro-calorimetry and electrochemical methods. The paper focuses in particular on the open-circuit voltage (OCV) hysteresis of the LMR-NCM material, which results in a significant reduction in energy round-trip efficiency (≈90% for LMR-NCM/Li cells vs ≈99% for NCA/Li cells at C/10) and therefore in an additional source of heat that has to be considered for the thermal management of the cell. The total heat release of the LMR-NCM/Li cells is found to be nine times higher than that of the corresponding NCA/Li cells (at C/10). In the case of the LMR-NCM cathode, the heat due to OCV hysteresis is responsible for up to 55% of the total energy loss. Using the applied approach, the OCV hysteresis heat is separated into its share during charge and discharge and is furthermore presented as a function of SOC. Additional sources of heat, such as reversible entropic heat, parasitic effects, and measurement limitations, are discussed in terms of their contribution to the overall energy balance of the two cell chemistries.