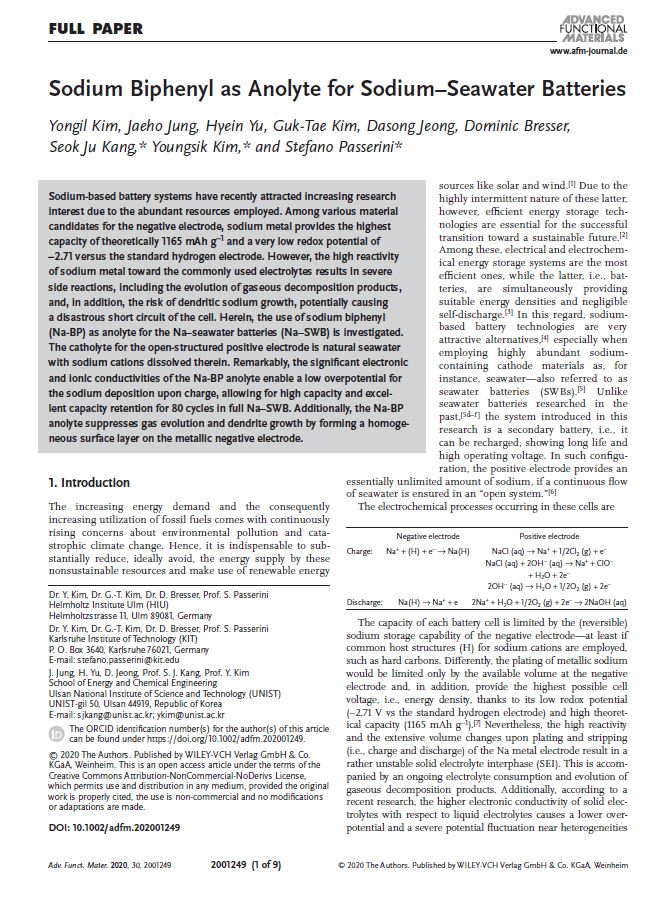 Sodium biphenyl is investigated as an anolyte for sodium metal/seawater batteries. The sodium biphenyl anolyte enables an excellent capacity retention over 80 cycles in anode‐free seawater battery full‐cell configuration. This is because the sodium biphenyl behaves as a “mediator/ carrier” for sodium transport in the negative electrode compartment thanks to its simultaneous ionic and electronic conductivity. Sodium‐based battery systems have recently attracted increasing research interest due to the abundant resources employed. Among various material candidates for the negative electrode, sodium metal provides the highest capacity of theoretically 1165 mAh g−1 and a very low redox potential of −2.71 versus the standard hydrogen electrode. However, the high reactivity of sodium metal toward the commonly used electrolytes results in severe side reactions, including the evolution of gaseous decomposition products, and, in addition, the risk of dendritic sodium growth, potentially causing a disastrous short circuit of the cell. Herein, the use of sodium biphenyl (Na‐BP) as anolyte for the Na–seawater batteries (Na–SWB) is investigated. The catholyte for the open‐structured positive electrode is natural seawater with sodium cations dissolved therein. Remarkably, the significant electronic and ionic conductivities of the Na‐BP anolyte enable a low overpotential for the sodium deposition upon charge, allowing for high capacity and excellent capacity retention for 80 cycles in full Na–SWB. Additionally, the Na‐BP anolyte suppresses gas evolution and dendrite growth by forming a homogeneous surface layer on the metallic negative electrode.