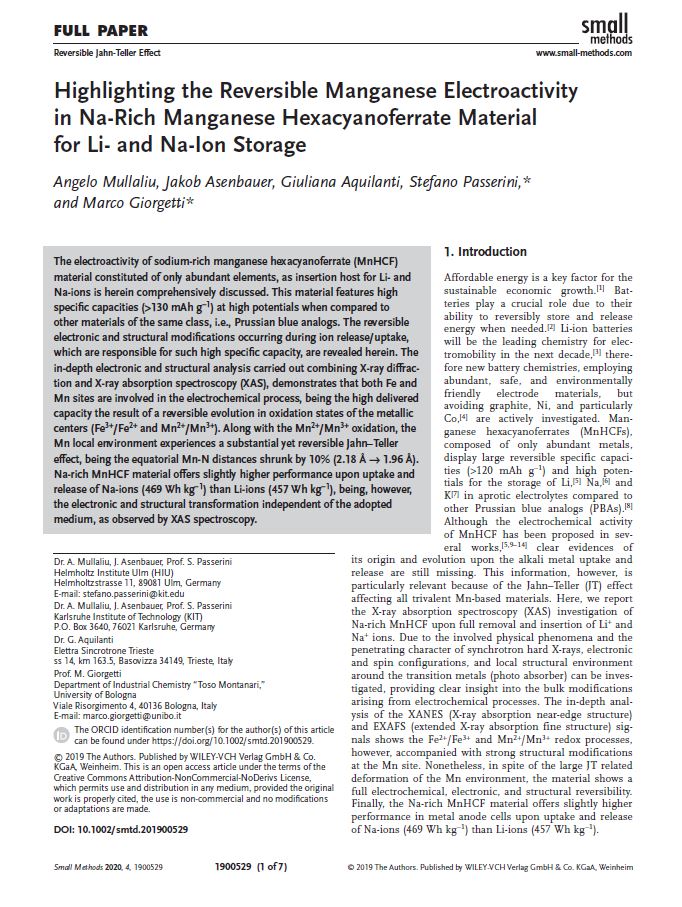 The electroactivity of sodium-rich manganese hexacyanoferrate (MnHCF) material constituted of only abundant elements, as insertion host for Li- and Na-ions is herein comprehensively discussed. This material features high specific capacities (>130 mAh g−1) at high potentials when compared to other materials of the same class, i.e., Prussian blue analogs. The reversible electronic and structural modifications occurring during ion release/uptake, which are responsible for such high specific capacity, are revealed herein. The in-depth electronic and structural analysis carried out combining X-ray diffraction and X-ray absorption spectroscopy (XAS), demonstrates that both Fe and Mn sites are involved in the electrochemical process, being the high delivered capacity the result of a reversible evolution in oxidation states of the metallic centers (Fe3+/Fe2+ and Mn2+/Mn3+). Along with the Mn2+/Mn3+ oxidation, the Mn local environment experiences a substantial yet reversible Jahn–Teller effect, being the equatorial Mn-N distances shrunk by 10% (2.18 Å → 1.96 Å). Na-rich MnHCF material offers slightly higher performance upon uptake and release of Na-ions (469 Wh kg−1) than Li-ions (457 Wh kg−1), being, however, the electronic and structural transformation independent of the adopted medium, as observed by XAS spectroscopy.