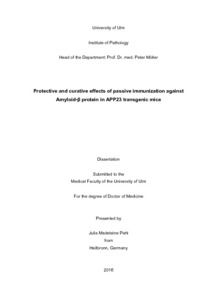 The aggregation of amyloid β protein (Aβ) in the brain finally leading to the plaque pathology seen in Alzheimer`s Disease (AD) gave birth to the idea of immunizing against Aβ as a potential treatment strategy. So far clinical trials in AD patients testing immunization against Aβ were not only incapable to improve cognition but also failed to stop or at least reduce disease progression. There are three biochemical stages of Aβ accumulation (B-Aβ stages) reflecting the maturation of Aβ aggregates comprising modified and non-modified forms of Aβ. As a mouse model to analyse the effects of passive immunization against Aβ we used the amyloid precursor protein (APP) transgenic mouse overexpressing human APP carrying the Swedish mutation (APP670/671KM→NL), i.e. APP23 mice. Treatment either with β1-anti-Aβ antibodies or with phosphate-buffered saline (PBS) was performed in one group at 3-5 months of age before the onset of Aβ pathology and in the second group at 7-11 months of age after the occurrence of plaque deposition and dendritic degeneration. Young mice revealed no modified forms of Aβ and therefore represent B-Aβ stage 1 whereas at the age of 11 months we detected Aβ aggregates containing N-terminal truncated, pyroglutamate modified and phosphorylated Aβ in both immunized and non-immunized mice consistent with B-Aβ stage 3. Mice passively immunized at the age of 3-5 months revealed a significantly higher amount of a distinct type of commissural neurons characterized by a highly ramified dendritic tree than non-immunized mice. In 7-11 months old mice anti-Aβ antibody treatment did not lead to a difference in the amount of commissural neurons compared between β1- and PBS-treated mice. Furthermore immunization in animals with preexisting Aβ pathology did not reveal a biochemically detectable difference of Aβ in the brain compared to control mice. Therefore a protective effect of immunization could be observed at a phase in AD disease progression when Aβ pathology is absent or at an early stage exhibiting merely non-modified forms of Aβ. There are no curative effects at later stages defined by the occurrence of mature Aβ aggregates likewise this might explain absent curative effects in clinical trials with AD patients.