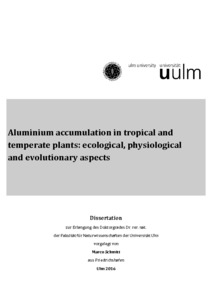 The goal of the first chapter of this thesis was to quantitatively evaluate the Al concentration in various plant tissues of Symplocos species natively growing in their natural habitats in Indonesian montane rainforests. My main goal was to investigate the natural concentration of Al in different plant organs of Symplocos species in order to improve sustainable use by weaving communities. Furthermore, this study contributes to our understanding of the intraspecific and within-tree variation of Al accumulation, which was also studied with respect to soil characteristics. The second chapter includes a hydroponic setup in order to investigate the Al behaviour of Symplocos paniculata. I tested the effect of Al on seedlings and saplings of S. paniculata. The goal was to determine whether this temperate species a) would be able to accumulate Al in its above ground plant organs similar to tropical sister species, and b) would show a beneficial effect on its growth when Al was added to the nutrient solution. The third chapter, unlike chapters one and two, focuses on ferns and lycophytes instead of angiosperm plant species. While the evolution and phylogeny of Al accumulation was studied in detail for angiosperms (Jansen et al. 2000, 2002, 2004), this trait remains poorly explored in pteridophytes. By compiling a global dataset from literature and novel data, I aimed to explore the phylogenetic signals associated with Al accumulation in fern and lycophyte species.