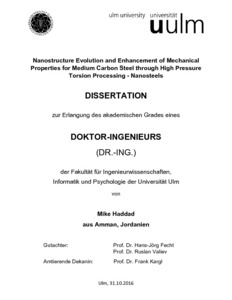 Since there is huge demand and motivation to find new stronger materials to be used in different structural and engineering applications, Nanostructured materials continue to be one of the most promising group as they are characterized by their outstanding strength compared to their coarse-grained counterparts, but on the other hand, huge efforts are made to improve their extremely poor ductility without sacrificing the high strength. To do so, it is essential to have deep understanding of the nanostructure formation and grain refinement mechanisms, as well as deformation and fracture physics. In this study, the behavior of C45 steel processed by room temperature high pressure torsion (RT HPT) and warm high pressure torsion (WHPT) was investigated based on a series of experimental measurements, including Vickers microhardness, nanoindentation, scanning electron microscopy (SEM), transmission electron microscopy (TEM), automated phase and crystal orientation mapping (ACOM), electron backscatter diffraction (EBSD), and in situ tensile test in an SEM. Based on the measurements, the differences in the microstructure evolution, the deformation behavior, the mechanical properties, as well as the fracture behavior, were studied, explained, and discussed comprehensively. TEM investigations of the microstructure of the RT HPT processed samples confirmed that this technique is very powerful in grain refinement. However, mechanical tests showed that the processed samples displayed very limited ductility. Moreover, the intensive deformation caused severe fragmentation and nearly complete decomposition and dissolution of the cementite lamellae. The segregation of carbon atoms into the induced dislocations and grain boundaries imparted a pinning effect to those dislocations, therefore, motivating the formation of new dislocation boundaries, hence improving grain refinement, and explaining the high strength and limited ductility. The WHPT processed samples show attractive mechanical properties that are superior to all grades of advanced high strength steels (AHSS). Furthermore, ACOM images for the WHPT processed samples show a limited cementite dissolution with a microstructure that consists of a mixture of equiaxed and elongated (in shear direction) ferritic lamellae in nanoscale size but with larger grains compared to that obtained by RT HPT processing. Moreover, the deformation and fracture behavior of the WHPT processed samples were comparable to some grades of AHSS as they deformed with no signs of instability or neck formation until the final fracture, besides, the samples broke perpendicular to the loading direction in a slant through the thickness fracture. Furthermore, the fracture surfaces were found to be covered with dimples, indicating a ductile fracture. Based on all the obtained mechanical properties and the microstructure evolution of RT HPT and WHPT processed samples, it is clear that using severe plastic deformation (SPD) methods at elevated temperatures (such as WHPT) can be considered as a promising and attractive processing technique for carbon steels. Besides the outstanding yield and tensile strength resulting from the implementation of this technique, C45 steel samples processed by WHPT also showed reasonable ductile behavior, unlike RT HPT processed samples, which make them suitable for many practical applications, and attractive for use in the production of micro-components.