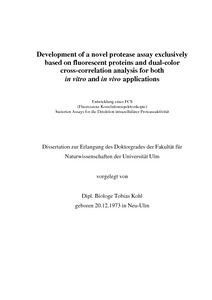 A novel protease assay for both in vitro and in vivo applications has been developed, that exclusively relies on fluorescent proteins and highly sensitive readout by Fluorescence Correlation Spectroscopy (FCS). Since fluorescent proteins were expressed within cells and FCS allowed for non-invasive intracellular analysis a truly endogenous experimental system has been established. Mutants of green fluorescent avGFP and red fluorescent DsRed have been combined to design various protease substrates and inert fusion proteins that not only allow for FRET (fluorescence resonance energy transfer) studies but also for dual-color cross-correlation analysis. The measurement principle is based on a spectrally resolved detection of single molecules diffusing in and out of a diffraction-limited laser focus. Double-labeled substrate molecules were turned into red and green single-labeled products by proteolytic cleavage at a target site between the two flanking tags, disrupting joint fluctuations in the two detection channels. Consequently FCS unlike FRET does not depend on an appropriate distance between fluorophores for energy transfer to occur. Moreover simultaneously assessing multiple dynamic particle parameters FCS proved to provide an important internal calibration. To simplify the measurement setup also two-photon excitation was employed, allowing for simultaneous excitation of GFP and DsRed tags with a single IR laser wavelength. The general concept was initially experimentally verified in vitro with an rsGFP-peptide-DsRed1 construct containing the cleavage site for recombinant TEV (Tobacco Etch Virus) protease. Intracellular studies were performed based on expressing fusion proteins connected by Caspase-3 sensitive protein linkers, putting this assay into the context of apoptosis assays for cellular key proteases. The stability of different protein linkers in part could be correlated with their composition. Fusion protein persistence and degradation were monitored online at high resolution within individual cells for 5 to ~ 23 hours. Consequently the extension of the presented approach to the study of reversible intracellular protein-protein interactions is readily conceivable and holds big promise for the elucidation of protein function and high-throughput applications.

Kohl, Tobias (2004): Development of a novel protease assay exclusively based on fluorescent proteins and dual-color cross-correlation analysis for both in vitro and in vivo applications. Open Access Repositorium der Universität Ulm. Dissertation. http://dx.doi.org/10.18725/OPARU-411