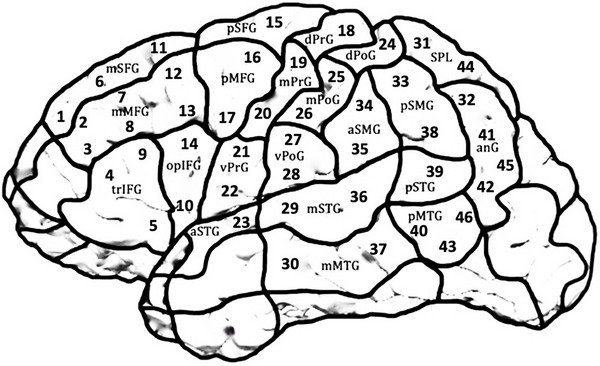 Visualization of functionally significant subcortical white matter fibers is needed in neurosurgical procedures in order to avoid damage to the language network during resection. In an effort to achieve this, positive cortical points revealed during preoperative language mapping with navigated transcranial magnetic stimulation (nTMS) can be employed as regions of interest (ROIs) for diffusion tensor imaging (DTI) fiber tracking. However, the effect that the use of different language tasks has on nTMS mapping and subsequent DTI-fiber tracking remains unexplored. The visualization of ventral stream tracts with an assumed lexico-semantic role may especially benefit from ROIs delivered by the lexico-semantically demanding verb task, Action Naming. In a first step, bihemispheric nTMS language mapping was administered in 18 healthy participants using the standard task Object Naming and the novel task Action Naming to trigger verbs in a small sentence context. Cortical areas in which nTMS induced language errors were identified as language-positive cortical sites. In a second step, nTMS-based DTI-fiber tracking was conducted using solely these language-positive points as ROIs. The ability of the two tasks’ ROIs to visualize the dorsal tracts Arcuate Fascicle and Superior Longitudinal Fascicle, the ventral tracts Inferior Longitudinal Fascicle, Uncinate Fascicle, and Inferior Fronto-Occipital Fascicle, the speech-articulatory Cortico-Nuclear Tract, and interhemispheric commissural fibers was compared in both hemispheres. In the left hemisphere, ROIs of Action Naming led to a significantly higher fraction of overall visualized tracts, specifically in the ventral stream’s Inferior Fronto-Occipital and Inferior Longitudinal Fascicle. No difference was found between tracking with Action Naming vs. Object Naming seeds for dorsal stream tracts, neither for the speech-articulatory tract nor the inter-hemispheric connections. While the two tasks appeared equally demanding for phonological-articulatory processes, ROI seeding through the task Action Naming seemed to better visualize lexico-semantic tracts in the ventral stream. This distinction was not evident in the right hemisphere. However, the distribution of tracts exposed was, overall, mirrored relative to those in the left hemisphere network. In presurgical practice, mapping and tracking of language pathways may profit from these findings and should consider inclusion of the Action Naming task, particularly for lesions in ventral subcortical regions.