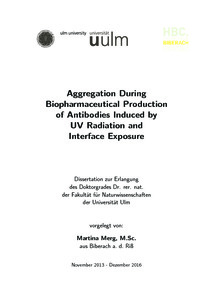 In the manufacturing process of therapeutic monoclonal antibodies (mAbs) aggregate formation is a crucial problem. Proteins tend to aggregate due to several stress conditions during processing and storage. This may reduce their efficacy and can result in dangerous side effects such as immunogenicity. Two aggregation-prone monoclonal antibodies (mAb1 and mAb2) were chosen for this study. Computer based analysis of their primary structure using the algorithm TANGO confirmed the presence of several aggregation prone regions (APRs) in mAb1 and mAb2. Both, ultra violet (UV) light and interface exposure are stress factors with major relevance in the manufacturing process of mAbs. Experimental model systems in 96-well format were developed to analyze and characterize aggregation of mAb1 and mAb2 induced by UV light and interface exposure. The small scale models enabled parallel screening of multiple conditions with minimal sample consumption. UV irradiation has proven to be an efficient approach for virus inactivation. However, a major problem of this method is photooxidation or physical degradation of antibodies, which can result in aggregate formation. MAb1 and mAb2 were exposed to UVC irradiation on a transilluminator. Spectral characteristics and radiation dose were similar to that of a UVC UVivatec GMP Lab system (Sartorius Stedim Biotech). UV exposed mAbs resulted in distinct size exclusion chromatograms different from unstressed antibodies. Aggregate and fragment formation increased with exposure time. High molecular weight bands (>150 kDa), observed in reducing sodium dodecyl sulfate polyacrylamide gel electrophoresis (SDS-PAGE), imply the formation of covalent, non-reducible photochemical crosslinks. Mechanisms responsible for this linkage as well as photooxidation, deamidation and other covalent modifications were characterized by mass spectrometry (MS). The detected covalent linkages were classified into intra- and intermolecular crosslinks based on the computationally modeled distances between the reactive atoms. UV induced conformational changes of the mAbs were analyzed by Fourier transform infrared (FTIR) spectroscopy and 8-Anilinonaphthalene-1-sulfonic acid (ANS) fluorescence spectroscopy. Alterations of the tertiary structure were detected in both mAbs whereas their secondary structure remained unaffected. During the production process therapeutic proteins are exposed to numerous solid-liquid interfaces as well as to the air-liquid interface. In this study, aggregation kinetics of mAb2 exposed to glass, stainless steel and air interfaces were recorded. UV absorption at 340 nm and 280 nm were used to determine the turbidity and to calculate the aggregation index, the latter being a measure of the fraction of aggregates in the sample. Sigmoidal aggregation kinetics were obtained, which depended on the material and the interface area. Monomer and oligomer fractions were measured by size exclusion high performance liquid chromatography (SE-HPLC). The quick aggregation process prevented the detection of soluble aggregates. Insoluble aggregates were analyzed by fluorescence microscopy. For all materials aggregate size increased with exposure time and interface area. The steel interface resulted in the fastest aggregation kinetics. Aggregation rate as well as aggregate size were much higher compared to glass- and air-induced aggregation processes. Structural analysis of interface-stressed mAb2 revealed alterations of the secondary structure induced by steel and glass. The secondary structure of air-stressed mAb2 remained unchanged, though. Three solvent additives, Tween 20, trehalose and trimethylamine oxide (TMAO) were analyzed for their ability to inhibit interface-induced aggregation. Aggregation kinetics was recorded and the aggregate size, amount and structure were analyzed. Tween 20 completely prevented protein aggregation at the air interface whereas it was only moderately protective at glass and steel interfaces. Trehalose inhibited only glass-induced aggregation and to some extent aggregation at the steel interface. The methylamine TMAO showed no protective effect but in contrast increased aggregate formation.