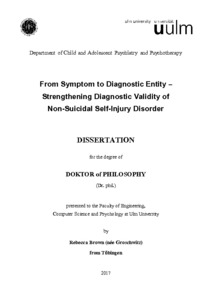 Non-suicidal self-injury (NSSI) has been suggested as independent diagnosis in Section three of the DSM-5. Although international research in recent years has been able to further the knowledge about this proposed disorder, there is still an ongoing discussion about its inclusion in classification systems. In 1970, Robins and Guze published guidelines for the validation of disorders. The present thesis includes five publications which follow those guidelines, in order to further the discussion about NSSI disorder (NSSID). The first publication included in this thesis is the first to describe the prevalence of NSSID in a representative sample in the general population of Germany. Although the prevalence of present NSSID shows to be around 0.3%, lifetime prevalence of NSSI is as high as 3% and NSSID is significantly more common in younger age groups. The second publication included in this thesis presents the validation of a structured clinical interview for NSSID. The Self-Injurious-Thoughts-and-Behaviors-Interview-German (SITBI-G) shows good reliability for assessing most diagnostic criteria of NSSID. However, it does not assess criterion E (clinically significant distress caused by NSSI) and is extensive in its use of time. The third study of this thesis investigates differences in neural processing of social exclusion in adolescents with major depression and with our without co-morbid NSSID. Adolescents with NSSID show differential processing in the medial prefrontal cortex and the ventrolateral prefrontal cortex, which could point to a hypersensitivity to social exclusion in adolescents with NSSID. The fourth study included in this thesis distinguishes NSSID from suicidal behavior disorder (SBD). Differences in methods, frequency and functionality of NSSID and SBD were found. The fifth study includes young adults who had engaged in NSSI as adolescents. While 50% of the sample still engaged in NSSI, 70% met criteria for an axis 1 psychiatric disorder and 50% were diagnosed with borderline personality disorder (BPD). Overall, results of this thesis show that NSSID is prevalent rather in young adults or adolescents, validated assessment tools for NSSID exist, NSSID can be differentiated from major depression, SBD, and BPD; and that adolescents engaging in NSSI are at high risk for psychological impairment into their young adulthood. Although further research is still needed in order to validate certain criteria of NSSID, results of this thesis point towards the validity of NSSID.