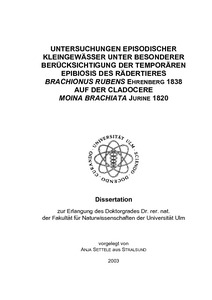 Epibiosis, i.e. an organism (the epibiont) attached to the body surface of another organism (the carrier) is rare in limnetic ecosystems. A frequent epibiont in freshwaters is the rotifer Brachionus rubens, which prefers to live attached to cladocera. The aim was to study the epibiosis rate, i.e. the number of B. rubens on Moina brachiata in the field. Based on field observations, advantages and disadvantages for both epibionts and carrier organisms were analyzed under natural, realistic epibiosis rates in laboratory experiments. Possible epibiosis-triggering parameters and the effects of the epibiosis on the activity and movement of the carrier organisms were examined. The mean epibiosis rate in the fields was 1 to 17 epibionts per M. brachiata, the maximum epibiosis rate was about 60. Epibiosis results in changes of predator-prey-interactions. The risk of predation for epizoic B. rubens by the invertebrate predator Asplanchna brightwelli/girodi is comparatively small, i.e. the survival rate of B. rubens depended on presence of carrier organism. For M. brachiata, the carrier organism, the risk of predation by vertebrate predators (newt larvae) increases when they carry epibionts. Carrier organisms with attached epibionts displayed an increased jump frequency. Increase of epibiont number per carrier organism resulted in an increase of jump frequency of adult M. brachiata but in a decrease of jump frequency of juvenile M. brachiata. The epibiosis rate depended on water temperature and food. Photoperiod and Asplanchna-kairomones had no effect on epibiosis rate. In this study a possible negative influence of epibionts on the reproduction and lifespan of M. brachiata could not be detected. In the field, the advantages and disadvantages of these associations appear to be balanced and result in coexistence of both species. Benefits and costs of epibiosis depend on epibiosis rate and environmental factors such as food supply and predators.