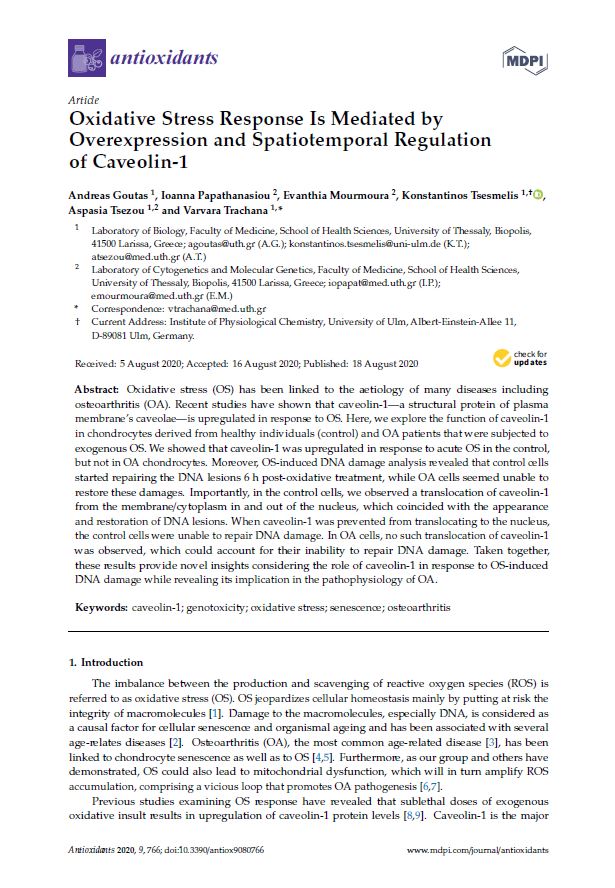 Oxidative stress (OS) has been linked to the aetiology of many diseases including osteoarthritis (OA). Recent studies have shown that caveolin-1—a structural protein of plasma membrane’s caveolae—is upregulated in response to OS. Here, we explore the function of caveolin-1 in chondrocytes derived from healthy individuals (control) and OA patients that were subjected to exogenous OS. We showed that caveolin-1 was upregulated in response to acute OS in the control, but not in OA chondrocytes. Moreover, OS-induced DNA damage analysis revealed that control cells started repairing the DNA lesions 6 h post-oxidative treatment, while OA cells seemed unable to restore these damages. Importantly, in the control cells, we observed a translocation of caveolin-1 from the membrane/cytoplasm in and out of the nucleus, which coincided with the appearance and restoration of DNA lesions. When caveolin-1 was prevented from translocating to the nucleus, the control cells were unable to repair DNA damage. In OA cells, no such translocation of caveolin-1 was observed, which could account for their inability to repair DNA damage. Taken together, these results provide novel insights considering the role of caveolin-1 in response to OS-induced DNA damage while revealing its implication in the pathophysiology of OA.