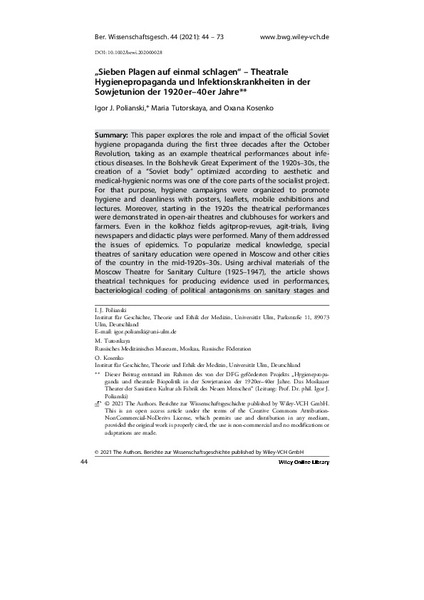 Abstract This paper explores the role and impact of the official Soviet hygiene propaganda during the first three decades after the October Revolution, taking as an example theatrical performances about infectious diseases. In the Bolshevik Great Experiment of the 1920s–30s, the creation of a “Soviet body” optimized according to aesthetic and medical‐hygienic norms was one of the core parts of the socialist project. For that purpose, hygiene campaigns were organized to promote hygiene and cleanliness with posters, leaflets, mobile exhibitions and lectures. Moreover, starting in the 1920s the theatrical performances were demonstrated in open‐air theatres and clubhouses for workers and farmers. Even in the kolkhoz fields agitprop‐revues, agit‐trials, living newspapers and didactic plays were performed. Many of them addressed the issues of epidemics. To popularize medical knowledge, special theatres of sanitary education were opened in Moscow and other cities of the country in the mid‐1920s–30s. Using archival materials of the Moscow Theatre for Sanitary Culture (1925–1947), the article shows theatrical techniques for producing evidence used in performances, bacteriological coding of political antagonisms on sanitary stages and transformations of everyday cultural practices in theatrical hygiene propaganda.