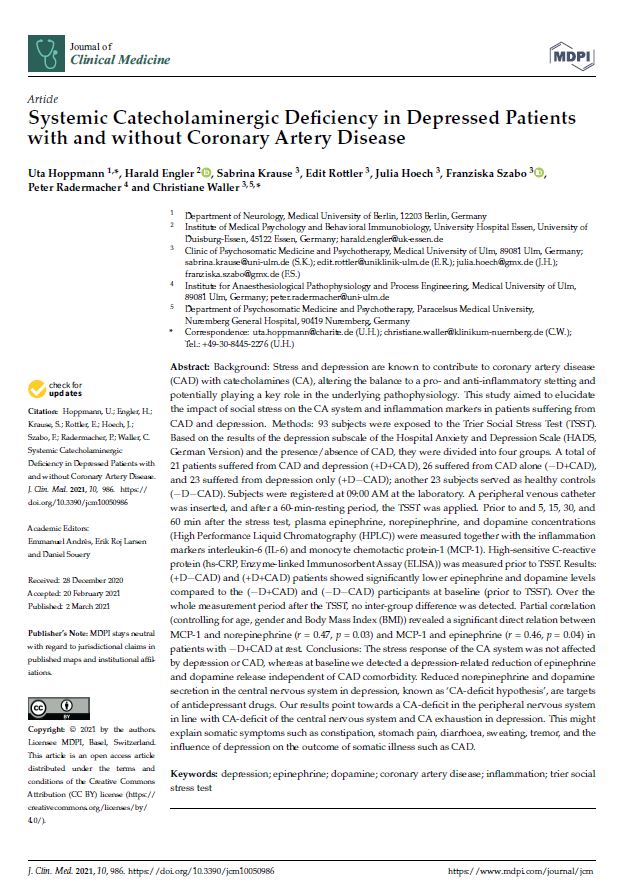 Background: Stress and depression are known to contribute to coronary artery disease (CAD) with catecholamines (CA), altering the balance to a pro- and anti-inflammatory stetting and potentially playing a key role in the underlying pathophysiology. This study aimed to elucidate the impact of social stress on the CA system and inflammation markers in patients suffering from CAD and depression. Methods: 93 subjects were exposed to the Trier Social Stress Test (TSST). Based on the results of the depression subscale of the Hospital Anxiety and Depression Scale (HADS, German Version) and the presence/absence of CAD, they were divided into four groups. A total of 21 patients suffered from CAD and depression (+D+CAD), 26 suffered from CAD alone (−D+CAD), and 23 suffered from depression only (+D−CAD); another 23 subjects served as healthy controls (−D−CAD). Subjects were registered at 09:00 AM at the laboratory. A peripheral venous catheter was inserted, and after a 60-min-resting period, the TSST was applied. Prior to and 5, 15, 30, and 60 min after the stress test, plasma epinephrine, norepinephrine, and dopamine concentrations (High Performance Liquid Chromatography (HPLC)) were measured together with the inflammation markers interleukin-6 (IL-6) and monocyte chemotactic protein-1 (MCP-1). High-sensitive C-reactive protein (hs-CRP, Enzyme-linked Immunosorbent Assay (ELISA)) was measured prior to TSST. Results: (+D−CAD) and (+D+CAD) patients showed significantly lower epinephrine and dopamine levels compared to the (−D+CAD) and (−D−CAD) participants at baseline (prior to TSST). Over the whole measurement period after the TSST, no inter-group difference was detected. Partial correlation (controlling for age, gender and Body Mass Index (BMI)) revealed a significant direct relation between MCP-1 and norepinephrine (r = 0.47, p = 0.03) and MCP-1 and epinephrine (r = 0.46, p = 0.04) in patients with −D+CAD at rest. Conclusions: The stress response of the CA system was not affected by depression or CAD, whereas at baseline we detected a depression-related reduction of epinephrine and dopamine release independent of CAD comorbidity. Reduced norepinephrine and dopamine secretion in the central nervous system in depression, known as ‘CA-deficit hypothesis’, are targets of antidepressant drugs. Our results point towards a CA-deficit in the peripheral nervous system in line with CA-deficit of the central nervous system and CA exhaustion in depression. This might explain somatic symptoms such as constipation, stomach pain, diarrhoea, sweating, tremor, and the influence of depression on the outcome of somatic illness such as CAD.