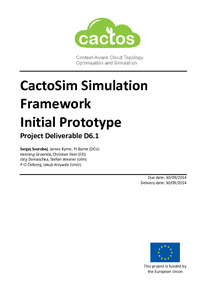 This deliverable provides supporting documentation for the official deliverable D6.1, the initial release of the CactoSim simulation framework. It presents the reader with the scope of the deliverable, initial requirements and architectural design for CactoSim. Updated requirements are given, and the foundations that CactoSim are built upon are described. A description of the architecture of the CactoSim V1.0 release is given, and this leads into a description of the graphical user interface by which users can interact with the tool. Provisioning is described, as well as licensing information. Finally, a feature description is given for CactoSim, with an overview of planned future releases also described.