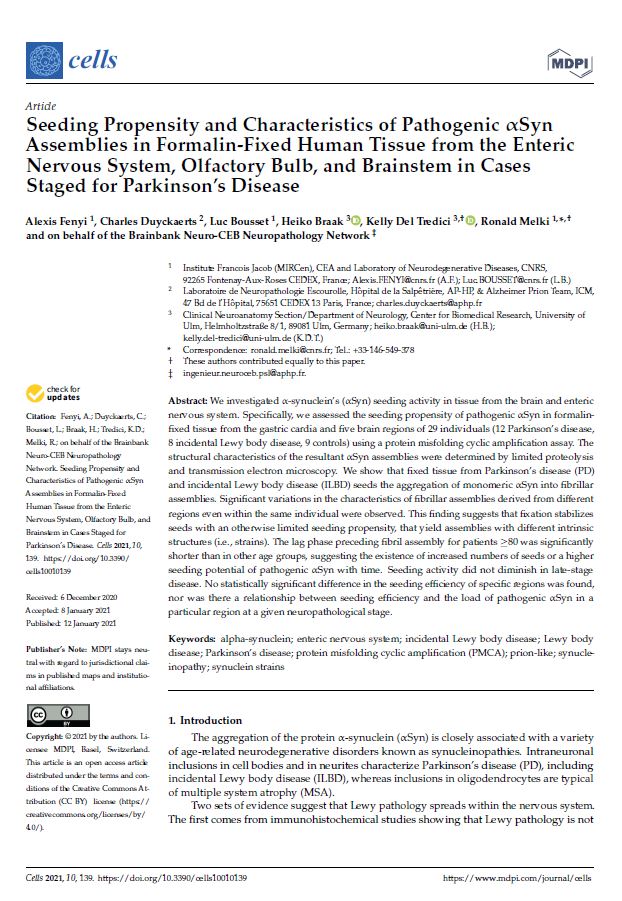 We investigated α-synuclein’s (αSyn) seeding activity in tissue from the brain and enteric nervous system. Specifically, we assessed the seeding propensity of pathogenic αSyn in formalin-fixed tissue from the gastric cardia and five brain regions of 29 individuals (12 Parkinson’s disease, 8 incidental Lewy body disease, 9 controls) using a protein misfolding cyclic amplification assay. The structural characteristics of the resultant αSyn assemblies were determined by limited proteolysis and transmission electron microscopy. We show that fixed tissue from Parkinson’s disease (PD) and incidental Lewy body disease (ILBD) seeds the aggregation of monomeric αSyn into fibrillar assemblies. Significant variations in the characteristics of fibrillar assemblies derived from different regions even within the same individual were observed. This finding suggests that fixation stabilizes seeds with an otherwise limited seeding propensity, that yield assemblies with different intrinsic structures (i.e., strains). The lag phase preceding fibril assembly for patients ≥80 was significantly shorter than in other age groups, suggesting the existence of increased numbers of seeds or a higher seeding potential of pathogenic αSyn with time. Seeding activity did not diminish in late-stage disease. No statistically significant difference in the seeding efficiency of specific regions was found, nor was there a relationship between seeding efficiency and the load of pathogenic αSyn in a particular region at a given neuropathological stage.