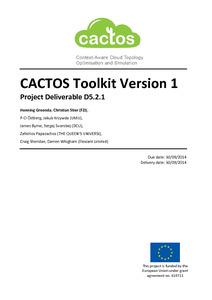 In Infrastructure as a Service (IaaS) cloud data centres, customers can run their software on the virtualized infrastructure of a data centre. They benefit from easy scalability and pay-as-you-go payment models and are able to request Virtual Machines (VM) with varying properties, such as processing speed or memory size. Data centre providers benefit from consolidation and economy of scales effects if several VMs are deployed on the same physical resources without Quality of Service (QoS) conflicts, e.g. because VMs often idle and rarely use all available resources. The efficient utilisation of the underlying physical infrastructure including management and topology optimisation determines the costs and ultimately the business success for data centre operators. The CACTOS project develops an integrated solution for runtime monitoring, optimisation and predictions. The solution supports data centre providers in managing and planning data centres. CACTOS consists of two toolkits: • The CACTOS Runtime Toolkit facilitates automated resource planning and optimisation for Infrastructure as a Service (IaaS) data centres. • The CACTOS Prediction Toolkit enables what-if analyses including effects caused by automated resource optimisation based on existing or planned data centre topologies. This document provides an overview on both toolkits and their interactions in the completed first iteration step. The focus of this deliverable is on describing the CACTOS Runtime Toolkit but was extended to give a holistic view and cover the CACTOS Prediction Toolkit as well. The CACTOS Runtime toolkit consists of independent tools for cloud infrastructure analytics and optimisation. This document describes the purpose and features of the tools as well as utilised base technology and provided interfaces. The analytics-oriented tool, CactoScale, provides already an automated extraction of central infrastructure information and monitoring of a running data centre. The optimisation-oriented tool, CactoOpt, can perform optimisation operations on the basis of the extracted information. However, the execution of optimisation operations on cloud middleware requires manual effort. This document describes the provisioning of both toolkits within a data centre and enables testing and running the approach in an own data centre. Exemplary use cases show the applicability and how important tasks are realized in the toolkit. This document delineates how the tools that were developed as part of the individual deliverables for CactoOpt (D3.1 Prototype Optimization Model), for CactoScale (D4.1 Data Collection Framework) and CactoSim (D6.1 CactoSim Simulation Framework Initial Prototype) are integrated into the CACTOS Runtime Toolkit and the CACTOS Prediction Toolkit. Based upon the integration implementation presented in this document, (D5.1 Model Integration Method and Supporting Tooling) will outline the integration methodology that is applied in the toolkits discussed by this deliverable. Exemplary use cases presented in this document were motivated by one of the CACTOS testbeds that is outlined in (D7.2.1 Physical Testbed). The current version of the CACTOS Runtime Toolkit requires some manual interaction with the data centre operator to realise the optimisations. As part of the deployment of the CACTOS Runtime Toolkit in a small-scale testbed (D5.3 Operational Small Scale Cloud Testbed Managed by the CACTOS Toolkit) the integration will be fully automated. In line with the effort of promoting and enabling continued development of the CACTOS toolkits, we released both toolkits under the licensing terms of the Eclipse Public License Version 1. Deliverable (D5.1 Model Integration Method and Supporting Tooling) will contain an in-depth evaluation of different licensing models and the rationale for opting with for the proposed licensing model.