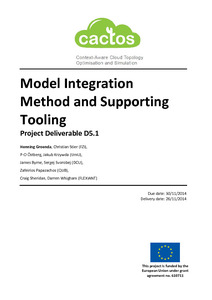 The CACTOS project aims to improve the operational efficiency of cloud data centres by supporting data centre operators in the planning and operation of heterogeneous data centres. One major goal of CACTOS is to enable automated capacity and resource management for virtualised infrastructure environments built upon the Infrastructure as a Service (IaaS) paradigm. This document outlines the model‐driven methodology developed for the integration of runtime monitoring of cloud‐based data centres with runtime optimisation techniques. The CACTOS project develops an integrated solution for runtime monitoring, optimisation and predictive analysis of data centres. The solution supports data centre providers in managing and planning data centres. CACTOS consists of two toolkits: • The CACTOS Runtime Toolkit enables automated resource planning and optimisation for IaaS data centres. • The CACTOS Prediction Toolkit supports what‐if analyses for existing or planned data centre topologies that account for effects caused by automated resource optimisation. While the focus of this document is to describe the integration methodology developed to couple runtime monitoring and optimisation for cloud data centres in the CACTOS Runtime Toolkit, the outlined methodology was developed to facilitate the integration across all toolkits developed in CACTOS. Hence, the integration of optimisation and monitoring with the simulative predictions in the CACTOS Prediction Toolkit is also discussed. The main contributions of this deliverable are the CACTOS Cloud Infrastructure Models that define the common language through which the runtime analytics tool, CactoScale, and the optimisation tool, CactoOpt, exchange information on the data centre’s structure and operational state. The models allow for the capturing of the deployment of Virtual Machines (VMs) on the middleware used in cloud data centres. Additionally, they track measurements and metrics that reflect the operational efficiency of the data centre. Instances of the CACTOS Cloud Infrastructure Models are constructed and maintained by CactoScale. CactoOpt uses the captured models as input for its optimisations. This document gives an overview on the developed models and how they are utilised in the context of a holistic integration process. It relates to other deliverables by integrating the information on CactoScale’s runtime monitoring (D4.2 Preliminary offline trace analysis), CactoOpt’s topology optimisation algorithms (D3.1 Prototype Optimization Model) and the simulative what‐if analyses of CactoSim (D6.1 CactoSim Simulation Framework Initial Prototype) for data centres. Furthermore, recent (D5.2.1 CACTOS Toolkit Version 1) and planned releases of the CACTOS toolkit (D5.2.2 CACTOS Toolkit Version 2) and the licensing models proposed for the individual CACTOS tools are outlined. The feature scope and integration of these features has served as the foundation for the requirements analysis of the developed integration methodology. The current iteration of the CACTOS Cloud Infrastructure Models capture all essential characteristics required to support an integration of current and planned features in all toolkits. Future iterations will improve the usability of the developed models and extend them to address newly identified requirements. In addition, this document describes the development process of the toolkits and the infrastructure used throughout the CACTOS project. The document discusses the setup of CACTOS’ development and build infrastructure and sketches the chosen architecture for the infrastructure. A holistic development process for both CACTOS Runtime Toolkit and the CACTOS Prediction Toolkit was chosen in order to facilitate early as well as Continuous Integration throughout and beyond the project’s life cycle. The build infrastructure was set up following the principle of Continuous Integration and allows for continued development and integration of all tools developed in the CACTOS projects, as well as the tools that they build upon. Finally, the document discusses different licensing models for the release of both toolkits. In line with the effort to keep the results of the CACTOS project open for further development and use by the Open Source community, this document proposes to release all major project contributions under the Eclipse Public License Version 1.