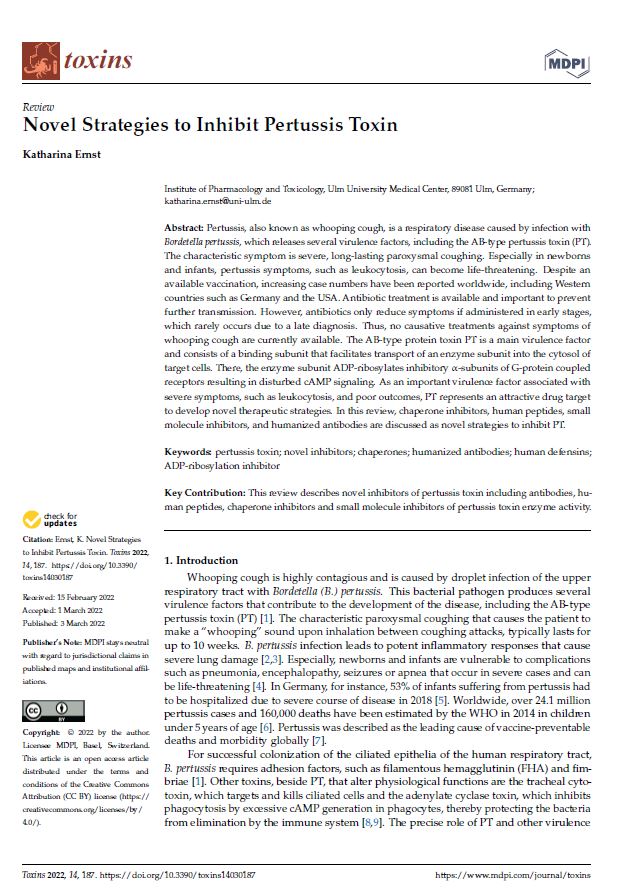 Pertussis, also known as whooping cough, is a respiratory disease caused by infection with Bordetella pertussis, which releases several virulence factors, including the AB-type pertussis toxin (PT). The characteristic symptom is severe, long-lasting paroxysmal coughing. Especially in newborns and infants, pertussis symptoms, such as leukocytosis, can become life-threatening. Despite an available vaccination, increasing case numbers have been reported worldwide, including Western countries such as Germany and the USA. Antibiotic treatment is available and important to prevent further transmission. However, antibiotics only reduce symptoms if administered in early stages, which rarely occurs due to a late diagnosis. Thus, no causative treatments against symptoms of whooping cough are currently available. The AB-type protein toxin PT is a main virulence factor and consists of a binding subunit that facilitates transport of an enzyme subunit into the cytosol of target cells. There, the enzyme subunit ADP-ribosylates inhibitory α-subunits of G-protein coupled receptors resulting in disturbed cAMP signaling. As an important virulence factor associated with severe symptoms, such as leukocytosis, and poor outcomes, PT represents an attractive drug target to develop novel therapeutic strategies. In this review, chaperone inhibitors, human peptides, small molecule inhibitors, and humanized antibodies are discussed as novel strategies to inhibit PT.